Where to See Antarctic Penguins?

Antarctica’s majestic beauty may be an overwhelming thing yet if truth be told, it’s the continent’s furry-dudes-in-tuxedos that rate highest on everyone’s wish-list. Penguin-spotting in Antarctica is the most coveted and rewarding highlight of any expedition to the frozen land on the south and, although your encounters are guaranteed, you may appreciate knowing where and when you’re likely to find the little guys waddling about.

Recent research findings unveiled excellent news: Antarctica is home to millions of more penguins than previously thought. Your guide to Where to See Antarctic Penguins details all you need to know, including the different species found in and around the White Continent and how to best approach an up-close-and-personal encounter, responsibly. 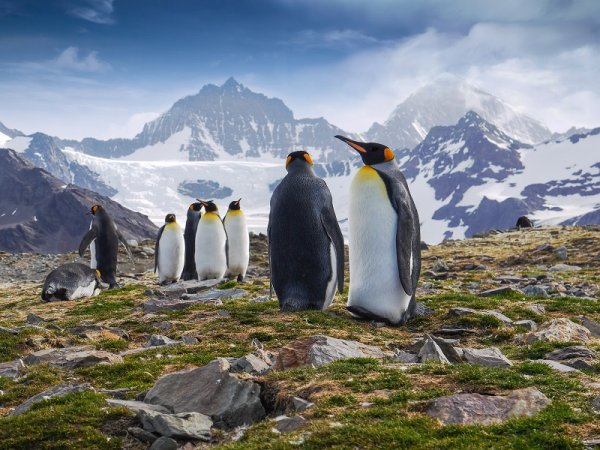 Which species of penguins live in Antarctica?

All up, this wonderful planet of ours is home to between 17 and 19 different species of penguins, with the exact number still up for debate for reasons which we shall explain further on in the article.

Penguins are primarily inhabitants of the Southern Hemisphere although their wide roaming has seen them cross that invisible equatorial line, particularly in the Galapagos Islands of Ecuador.

Although we mostly think of penguins as hardy creatures adapt to super harsh environments, only a few species actually make it all the way to Antarctica. The Antarctic Peninsula itself is usually only home to 6 species of penguins whilst more species are found in the waters off its coast and its nearest islands, such as South Georgia or the Falklands. Most penguins, in fact, prefer to live in more temperate ‘in-between’ regions of South America, Africa, New Zealand and Australia. A lovely compromise we can all appreciate!

Penguins can be found in the Antarctic Peninsula, the sub-Antarctic islands and all the nutrient-rich waters in between.

The largest penguin species in the world is the magnificent Emperor Penguin (of The March of the Penguins fame) which lives exclusively in Antarctica and can grow up to 1.1m in height and weigh up to 35kg! If their sheer size doesn’t give them away, the Emperors are easily spotted due to their glowing orange cheeks. When talking about penguin-spotting in Antarctica, it’s the mighty Emperor most people dream to see.

The Antarctic Emperor takes ‘hardy’ to all new levels: this is the only penguin species (and only warm-blooded animal) that lives, breeds and nests this far south, all year long. By and large, the bigger the penguin the more like it is to venture into colder climates (for as we all know, a few extra pounds make for excellent insulation) and that’s one of the many reasons Antarctica is such a precious spot for penguin-watching. Not only do you see a mind-boggling number of them but you’re likely to see the largest in the world, as well. 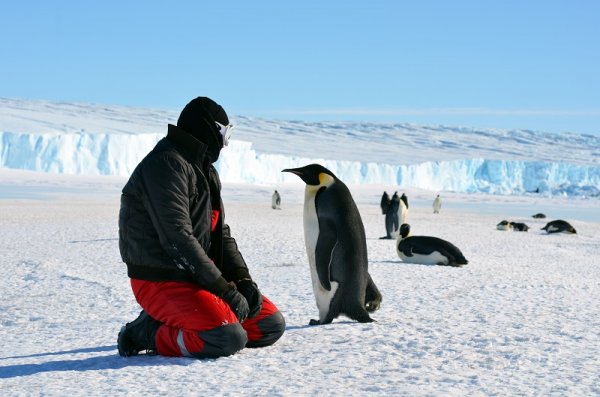 The smallest penguin you’ll see in Antarctica is the wee lil’ Adélie, which grows to about 60cm in height and weighs about 3-4kg. Easily recognizable due to their very black head and white-ringed eyes, the Adélie is one of the most numerous you’ll come across with 6 million individuals believed to vacation here, every year. 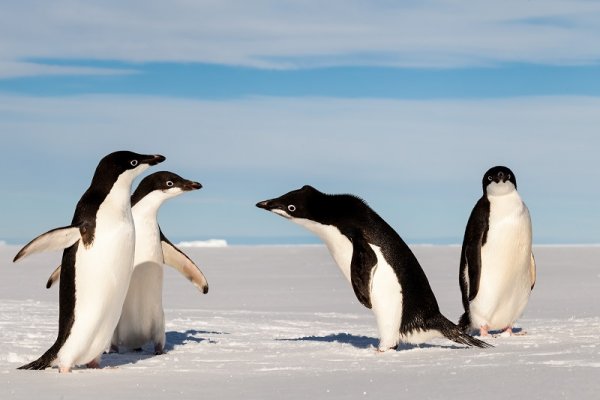 The most numerous of all Antarctic penguins is the Chinstrap, so named for the built-in helmet design on its head. There are an estimated 13 million of these cool riders in Antarctica, many of whom live on gigantic icebergs floating about Antarctic waters. The Chinstrap is only marginally bigger than the Adélie. 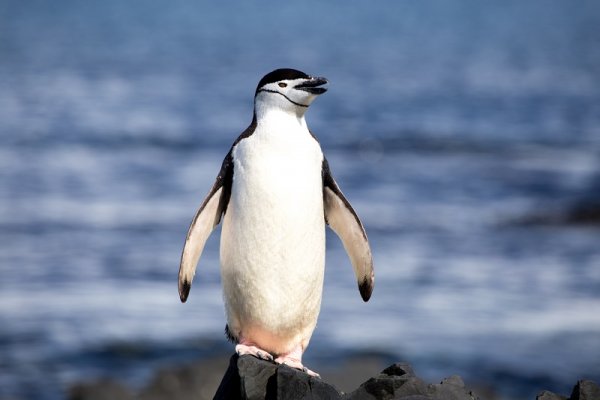 The Gentoo penguin has a white stripe that runs from one eye to the other across the back of its head and is most numerous on the Falkland Islands, a stellar natural and historical addition to Antarctica expedition itineraries. The Gentoo is about 1/3 larger than the Adélie, larger than the Gentoo and, like both, builds its circular nest from rocks, which it fights fervently to collect and, sometimes, cunningly steal. 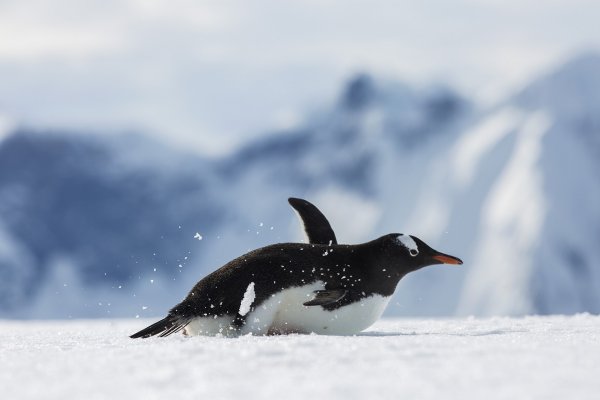 The King penguin often gets confused for the Emperor although, in real life, is only about 2/3 of the size. It also has glowing orange spots although the Kings have them on their necks and ears rather than on their cheeks. South Georgia is home to a healthy colony of mighty Kings. 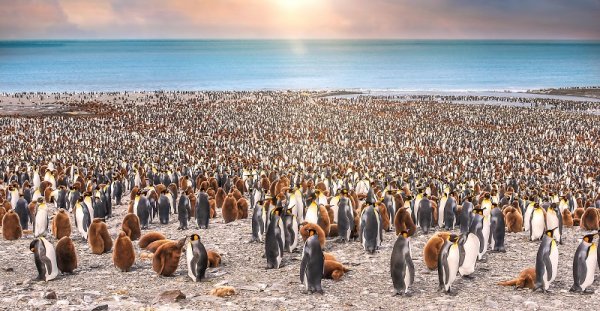 The funniest-looking penguin would have to be the Macaroni penguin, a creature whose name derives not from its love of pasta (contrary to popular belief) but, amusingly, from an early 19th-century hat-style that was all the rage in Great Britain. With those glowing orange plumes, the Macaroni really can’t be mistaken for any other species. 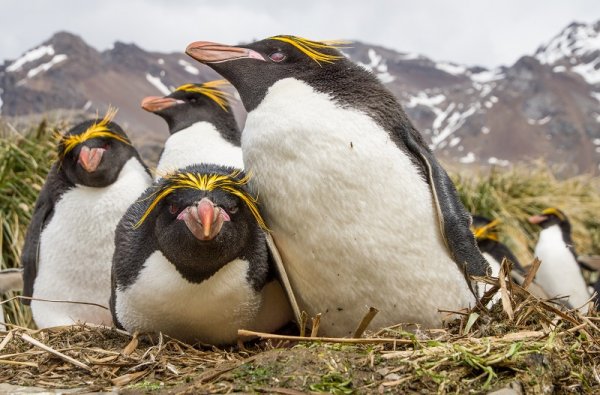 Peruse any of the itineraries of Antarctica expedition cruises and you’ll find an array of options for including a few stunning islands en-route to the frozen peninsula. Sub-Antarctic islands are prime breeding and nesting grounds for penguins due to their still very nutrient-rich waters yet considerably more manageable temperatures. Cruises which include such astonishing destinations as South Georgia and the Falklands are usually more expensive options yet if penguin spotting is an absolute life-dream of yours, dare we say these longer expeditions are worth their weight in gold.

See the map on our Where to Go in Antarctica blog to get a clearer idea of where all these stellar destinations are located.

Discover incredible wildlife and landscapes with tours to South Georgia.

The island of South Georgia is often dubbed the Galapagos of Antarctica due to the sheer concentration of wildlife that thrives here. Penguins, in particular, are absolutely prolific on South Georgia and this sensational spot boasts the world’s largest colony of Emperor Penguins, along with three other species. If penguins are a must-see for you then South Georgia is a definite must-visit. 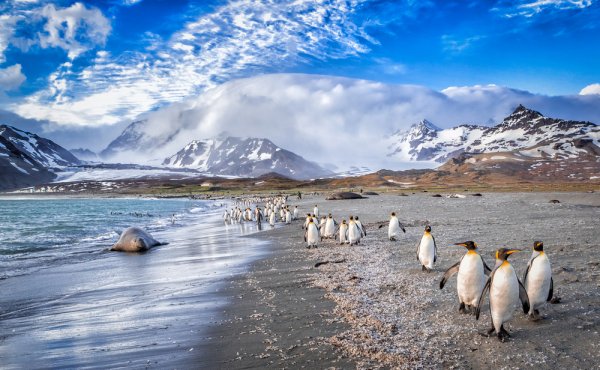 Macquarie Island is part of the largest UNESCO-protected marine reserve in the world and claims the Royal penguin as its most numerous endemic species. Royal penguins are the largest crested species of all and classified as threatened. The debate as to whether or not the Royal is a distinct species or a larger version of the macaroni is still ongoing and that’s the reason why the penguin species number is not set in stone. Macquarie is a remote, dramatic and exceptionally beautiful island that receives very few visitors, as it’s only accessible to guests aboard Antarctica expeditions from New Zealand and Australia. The Royal only breed on Macquarie although can be found torpedoing in waters around nearby islands as well.

Explore the stunning beauty of Falklands on our tours.

Argentina’s Falkland Islands (Las Malvinas) host five species of penguins, including King, Gentoo, Magellanic, Macaroni and Rockhopper. The Magellanic penguin is the largest of the warm-climate species and, alongside the Falklands, can also be spotted along Peruvian, Argentinian and Chilean coastlines (especially around Chiloe Island) back on the South American mainland. 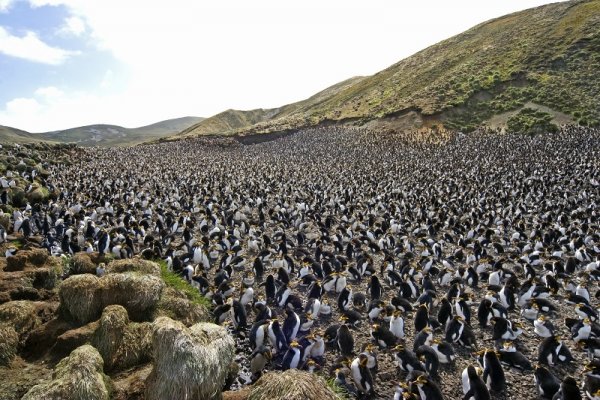 Experience the amazing whiteness of the icebergs in Antarctica. Find our tours here.

The Snow Hill Island Emperor penguins are the stuff Antarctic legends are made of, where remote location and arduous journey meets one of the most awe-inspiring wildlife species in the world. Normally ice-packed and impossible to reach if not by helicopter, the elusive island floats in the Weddell Sea and hosts the northernmost Emperor penguin colony on our planet. Covering an area of just under 400 square km, Snow Hill island is the northernmost Antarctic island off the southern coast of South America and visits are only possible as helicopter excursions on specific cruise liners. 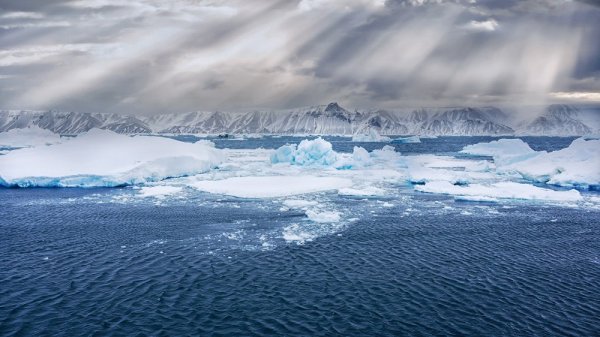 Learn about wild animals on our tours to Antarctica.

Another brilliant plus of tackling an Antarctic expedition From New Zealand or Australia is that you get to visit the remote and spellbinding Ross Sea  Ice Shelf, home to thousands of penguins scattered around skyrocketing glaciers. Over a million breeding pairs of Adélie penguins can now be spotted here, reputedly the highest number seen in over three decades. Adélies are considered by experts to be the epitome predictors of ice and sea environmental health and their numbers (whether they increase or decrease in a particular spot) are used to evaluate the state of both. Given the fact that Adélie relies primarily on krill, the base source of the Antarctic food chain, their prevalence tells scientists how well every other species is also doing.

Experience Antarctica wildlife on one of our tours.

Few cruises add a stop-over on the South Orkney islands but those lucky enough to do can enjoy the spectacle of large colonies of penguins, including Adélie, Gentoo and Chinstrap. 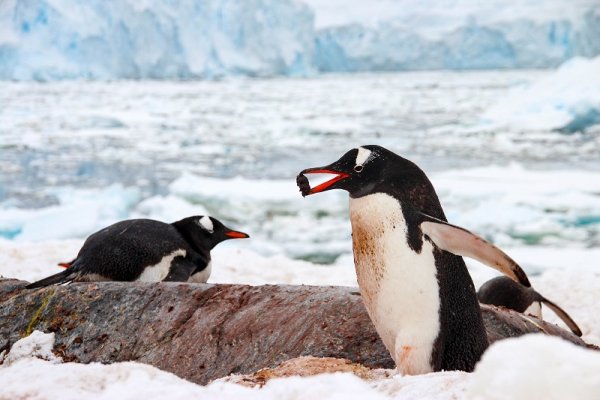 Visit Emperor and King penguins with our tour to South Georgia.

An ice and snow-covered extension of the stupendous Andes Mountains, the Antarctica Peninsula is the main destination for almost all Antarctic Expeditions. Leopard seals and whales are the top wildlife species to spot here with loads of penguins (almost all except Emperor and King) found in abundance in the best-protected coves along the rugged coast.

Antarctica is the renowned home of the penguin yet it’s important to remember that if penguin-spotting is a must – ESPECIALLY OF King and Emperor – then you’ll need to choose an itinerary that includes South Georgia, the Falklands or if coming from New Zealand/Australia, Macquarie Island. 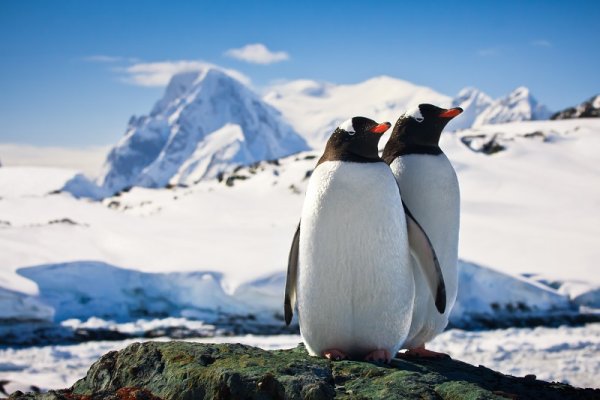 The best time to see the highest concentration of penguins in Antarctica is during the Austral spring and summer, in the months between October and February. Penguins tend to split their time evenly between land and water yet it’s during the warmer months that they tend to waddle on land for longer periods. This is, through no coincidence, the best time to visit Antarctica.

Early spring is best for Emperor penguins which, despite their numbers, are considered ‘near endangered’ and actually pesky to find. That’s the main reason journeys to South Georgia are so popular. It seems almost unfathomable that one would venture this far south and not see the Emperor yet if you want the highest sighting chances then South Georgia – or indeed Snow Hill island – are your best bets 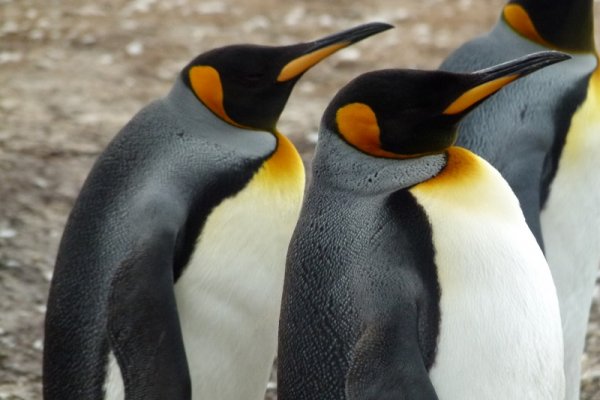 Responsible tourism - What to do (and not to do)

Penguins aren’t particularly afraid of humans and this, coupled with their inherent curiosity, make for exceptionally rewarding encounters. Come across a penguin in Antarctica and he (or she) is likely to waddle over to you, have a sniff, perhaps hop on your boots and investigate you. This is, without a doubt, an incomparable wildlife experience yet one which should be approached with a great deal of care.

Head to Antarctica on an expedition cruise and you’ll be given 101 instructions on how to approach – or, perhaps better stated, steer clear of – any animal you come across. Yet penguins aren’t renowned for paying much notice to internationally agreed codes of conduct and will think nothing of ignoring the rules and coming in for a closer look. So, what should you do if one does? Well, the common consensus is to use common sense. Rules are there to protect you and the animal so one doesn’t get injured and the other one stressed yet if you’re standing or sitting still and one waddles over to you, one might argue that abruptly storming off is what will cause the penguin to stress. Granted, you need not go in for a bear hug (as much as you might want to) but it’s acceptable to simply stay still and enjoy the magical meet-up. Other than that, it’s good to keep in mind that a respectable distance of at least 10 meters is advisable, especially when dealing with nursing mothers and bubs.

We hope our Antarctic penguin-watching travel advice will be useful as you plan your unforgettable adventure to the southernmost continent on earth. For more info on anything Antarctic related – including choice of expeditions, duration and inclusions, do visit our Antarctica Tours page and contact us, right here.

What Activities can I do in Antarctica?

Penguins of the word and where to find them