Celebrated between the evening of October 31st and November 2nd, Mexico’s Dia de los Muertos is the country’s most flamboyant cultural celebration. This is a time when everyone celebrates the lives of their dearly departed and prays for the eternal rest of their soul, decorating family graves in cemeteries, building elaborate altars of offerings and spending time there, together, to honour those they loved and lost. And because it’s Mexico, you know it won’t be a quiet and subtle affair!

Here’s all you need to know about the Day of the Dead and why travelling to Mexico to catch a glimpse of this exceptional festival makes for an unforgettable experience. 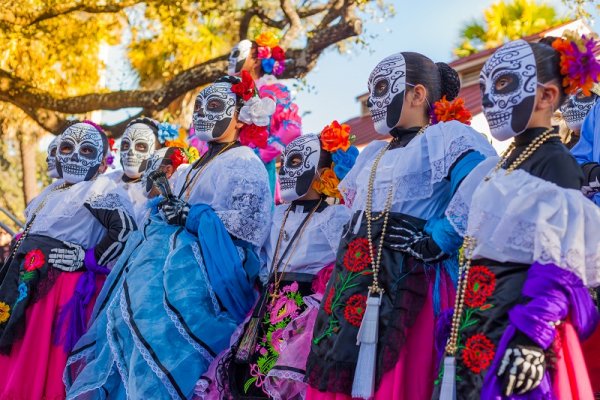 What is the Day of the Dead?

Unlike what some may think, Mexico’s Day of the Dead isn’t the country’s version of Halloween but an altogether different festival with a wildly distinct atmosphere, although they are obviously related by the calendar. In Mexico, it is definitely ‘fiesta time’ with death being a reason to honour one’s passing rather than be fearful of it. The festival is a fascinating maze of traditional rituals, all of which have a very specific meaning.

The event is such a unique and inherent part of Mexican culture that in 2008 it was added to UNESCO’s Intangible Cultural Heritage listing. 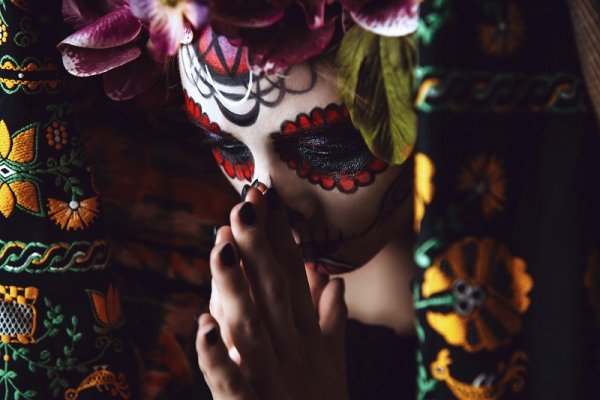 When did the Day of the Dead tradition start?

The Day of the Dead celebrations in Mexico date back to the time of the ancient Aztec Empire, when death was an event to be celebrated rather than mourned. The tradition is believed to be thousands of years old and given the fervent belief that earthly death was simply ‘one more step’ in a soul’s journey, it was a cause for much jubilation. Mourning death, in pre-Hispanic culture, was certainly frowned upon.

Nowadays, it coincides with All Saints and All Souls Day in the Catholic calendar (the traditional maize harvest time) so over time it has become a hybrid of pagan and Catholic rituals. The first day of the festival, November 1st, is dedicated to the innocents (the innocent children who have passed on) with November 2nd celebrating all the dead, usually from 3 pm onwards. 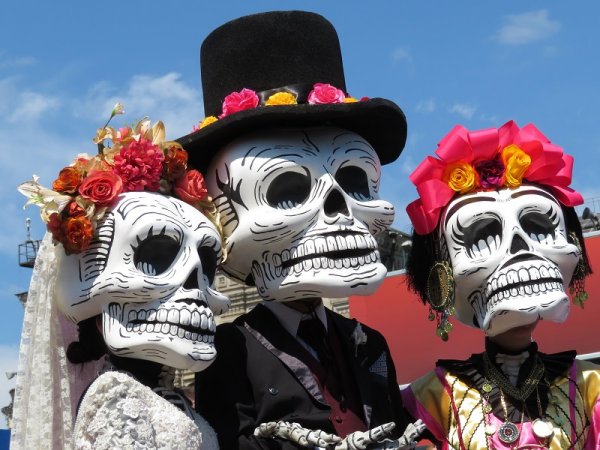 Day of the Dead participants with death masks

How does Mexico celebrate its Day of the Dead?

In Mexico, revellers put a lot of effort in their amazing makeup and costumes, holding all-night parties and processions with dancing, music and delicious traditional food making up a huge part of the celebrations. Some of it is sombre and ritualistic (like the procession to the cemeteries on the evening of the 31st October) whilst, as the days progress, festivities take on very much a fiesta-like vibe.

Locals construct ofrendas (literally ‘offering altars’) both in their own homes and in cemeteries, usually decorated with their loved one’s photo, special Dia de los Muertos trinkets (like skulls made of sugar), the deceased’s favourite foods and drinks as well as a sweet bread that’s especially baked for the occasion, called Pan de Muertos. Cemeteries are beautifully lit and decorated with candles and flowers (mostly marigold, the flower of the Aztecs) making for a very evocative and beautiful scene. Incense is burned to purify the air and prayers are chanted around graves, all night long. Should you be in Mexico during this time and are lucky enough to be invited to attend a family’s procession, don’t miss the chance to partake in this remarkable celebration, it really is unique. 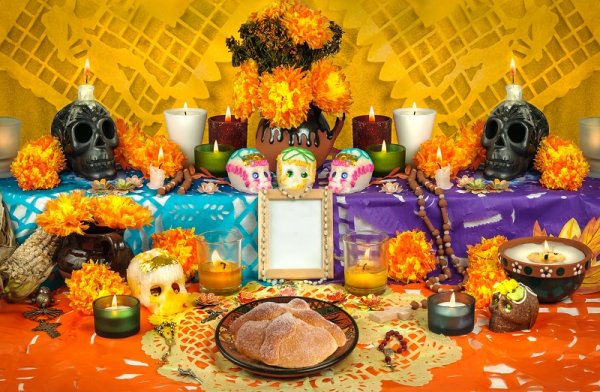 You’ll also encounter locals reciting poems in cemeteries. These poems, called calaveras, were traditionally carved onto tombstones and are usually witty and sarcastic jabs taken at those left behind. These clever short retorts are meant to soothe and entertain the crowds and are also often broadcast on TV channels and radios, around the country. More intimately, you’ll find families sharing funny stories about their loved ones, sharing inside jokes and mucking around about their quirks to help one another remember the dead lovingly and happily.

Mostly though, gatherings are festive and joyous, with people hanging out together, either in cemeteries, on their local street or at home, playing the guitar, singing, eating sweetbread and drinking hot chocolate, hoping their festivities bring peace and contentment to their dearly departed. For the fervently spiritual, the Day of the Dead Festival is vital to accepting death and people find great comfort in believing the soul of their loved ones are soothed by the company, merriment and good food. 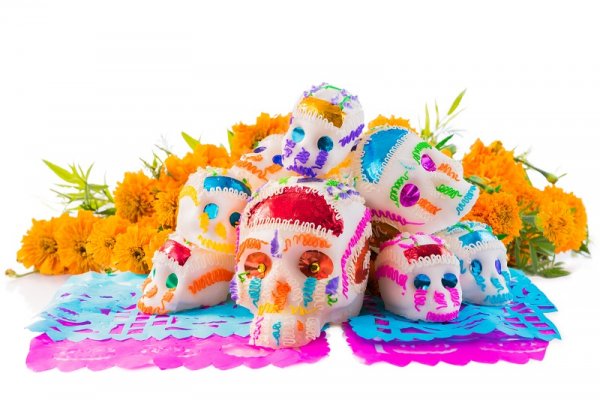 Since 2016, Mexico City has held a staggering Day of the Dead Parade just a few days before the official start of the festival, aimed at attracting tourists and marketing an event that has been gaining increasing prominence all over the world. Organisers hope the event, which they hope to hold every year, becomes a staple in the country’s festival calendar, enticing even more travellers to come join in the celebrations. 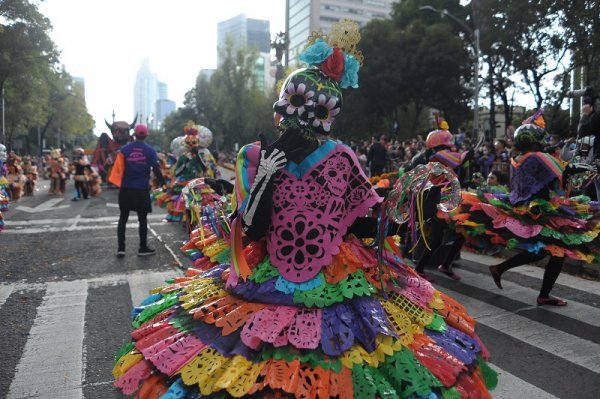 How do locals dress up for the Day of the Dead?

Face-paint is the first and most obvious part of the Day of the Dead gear-up and you’ll see children and adults alike ornately painting their faces to resemble skulls. Donning fancy costumes and usually carrying some kind of loud instrument (to keep the dead awake and partying), locals go to pains to dress up ornately for the occasion.

The elaborate dress-up for Day of the Dead is a pretty recent tradition, started by a satirical cartoonist in 1910. Jose Guadalupe Posada drew ‘Calavera Catarina’ (Catarina the Skull) to symbolise that everyone is the same ‘underneath’, under all the fancy clothing the rich and elite loved to wear. This modern version of the Lady of the Dead corresponds to the Aztec goddess of death and, since then, dressing up to look like a flamboyantly adorned skeleton has become the central aim of the Day of the Dead costumes. 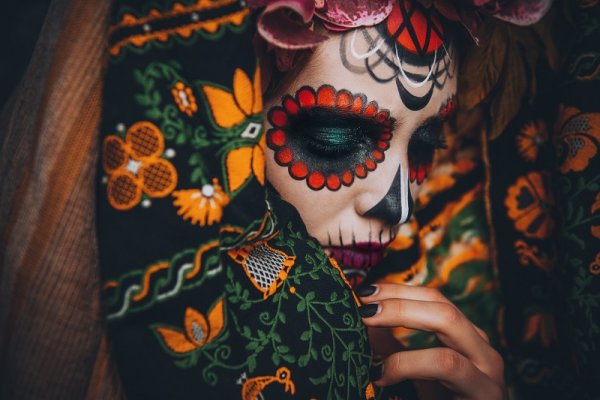 What are the main differences between Halloween and Day of the Dead?

Although both festivities share a European origin, from different parts of the continent, the similarities between Halloween and Day of the Dead, end right there. Whilst Halloween hails back to the Celtic end-of-harvest celebration, a night when it was believed the souls of the dead roamed the earth to sort of torment the living, the Day of the Dead originates from the belief that, during the 3-day celebration, people can ‘summon’ the souls of their departed in order to honour them.

From the get-go, the very aims of the celebrations are altogether distinct, let alone the different symbolisms each festival boasts. For Halloween, everything is made to drive away spirits whilst for Day of the Dead, everything is made to attract them. There’s nothing ‘scary’ about Day of the Dead celebrations and the aim is certainly not to spook one another witless – this is especially true of children, who are enticed to accept and even embrace death and not be fearful of it. 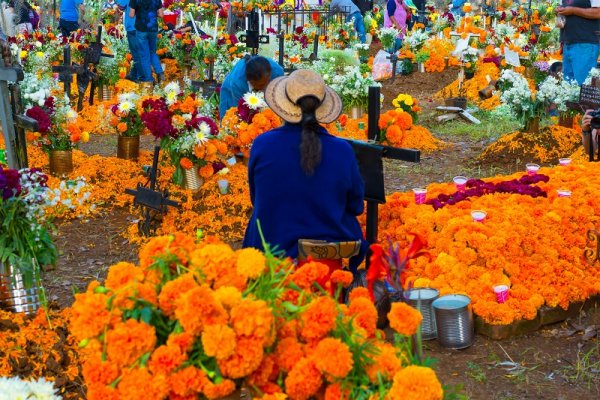 People accompanying their loved ones on the Day of the Dead.

Day of the Dead is also a much more colourful and flamboyant festival, involving More than just a few colours, like orange and black usually tied to Halloween. Whilst Halloween party-goers will try their hardest to concoct horror stories and make everyone scream, Mexicans retell funny anecdotes to make everyone laugh.

These are two very different celebrations which just happen to be held at the same time of year! 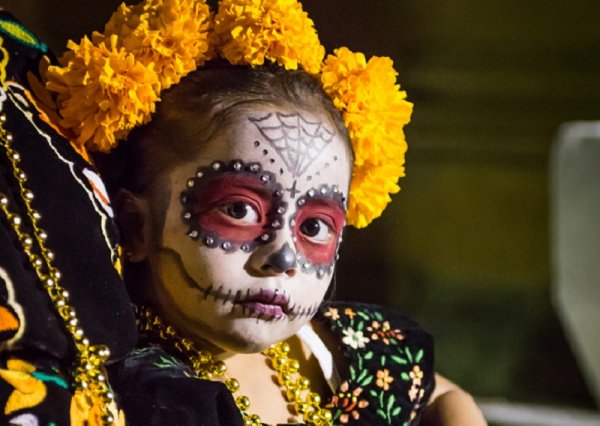 What do people eat during the Day of the Dead?

Food is always a huge part of celebrations in Latin America and never is this more obvious than during the Day of the Dead in Mexico. Aside from an abundance of ‘favourites’ cooked in honour of their dead, Mexicans also bake their ‘bread of the dead’ (over 400 varieties are baked, all over the country) and make all sorts of skull and bone-shaped rolls flavoured with aniseed and coloured with vegetable paint. 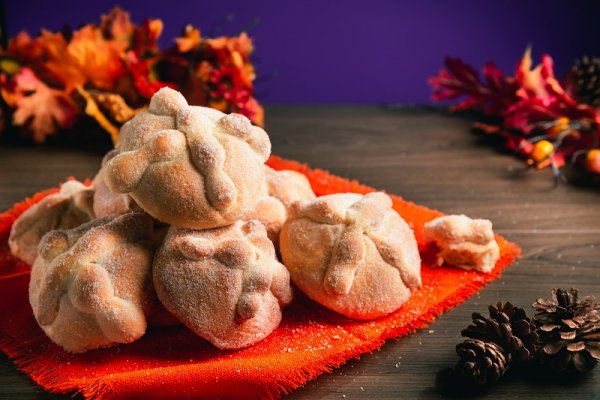 Another staple in the Day of the Dead culinary line-up is the sugar skull, adopted from16th-century Italian missionaries (also elaborately decorated) and a sweet agave fermented beverage called pulque, alongside the traditional hot chocolate.

Day of the Dead - Traditions and Games

Day of the Dead celebrations have taken hold abroad over the last few years, with cities like New York putting on amazing festivities to mark the occasion. Given the vibrant essence of the celebrations, it’s no wonder everyone wants a taste of this amazing Mexican event. Naturally, the best way to experience a traditional Day of the Dead festival is to visit Mexico – yet there are many ways to honour the tradition at home too.

First things first, don’t even try to look scary! Paint a super-realistic skeleton face by all means, but leave the fake blood, vampire fangs and plastic knives behind for this one. Plus, if you look closely at photos of local revellers, you’ll see them dressed in traditional garb and quite demure outfits. Use an array of brightly coloured clothing, including yellow, pink, red, purple, orange and, if you must, some black. Every colour has its own meaning and combined, they cover the sadness and happiness associated with the Day of the Dead celebrations. Ladies, your dress should be ankle length and flowy and if it’s floral and colourful, even better. Cap the outfit off with a big floppy dress and you’re all done!

Gentlemen, you’ll be traditionally going for the dapper and elegant look but if a 3-piece suit with top hat is out of the question, just keep it simple and classy. 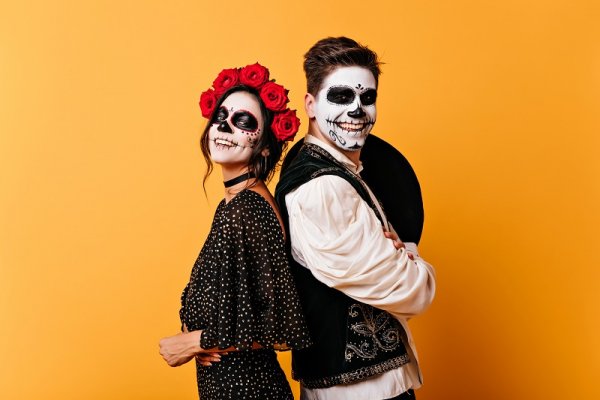 Day of the Dead Make-up

Hosting your own Day of the Dead party is bound to be a fantastic way to honour this very traditional Mexico celebrations but, let’s be honest…wouldn’t it be better to travel to Mexico instead?

See all our Mexico Tours and chat to us if you’d love to catch this or any other cultural festival during your trip.