A great way to experience the local culture when you're travelling in Peru is to try the local food, and in Peru there are so many delicious dishes to try that you're unlikely to find anywhere else in the world. With Peru having been awarded South America’s leading culinary destination 2022 by the World Travel Awards, it's a great time to head to this incredible country and try some traditional Peruvian food for yourself.

Peruvian cuisine stands out because it often mixes traditional ingredients that only grow in this country with culinary traditions that originated in other countries and regions. This global influence makes Peruvian food some of the most interesting in the world. Peruvian fusion cuisine can be found all over Peru and is a dream for every gourmet, but the capital city Lima is particularly known for having a thriving and world-beating culinary scene and so is a must-visit for foodies.

Trying local dishes gives you an insight and connection with local people and their traditions, gives you a chance to taste new flavours and enhances your travel experience. So before you embark on your tour of Peru, let's look at some of the delicious must-try foods of Peru.

Top 10 foods you must try when visiting Peru:

Top of any list of must-try foods in Peru is Ceviche, which originated here in Peru and is the national dish of the country. It's a cold-cooked fish dish that is marinated in lime juice and usually served alongside red onions, boiled corn and sweet potato. Unlike ceviche from Mexico, in Peru ceviche doesn't use tomatoes or avocado.

Many Peruvians believe that ceviche is an aphrodisiac and hangover cure, and since the dish is so popular in Peru, it can be found everywhere across the country.

If fact, this dish is so loved and important to the country that it's celebrated with National Ceviche Day every year on 28 June - so if you're travelling in Peru on that day you'll find restaurants and hotels offering special menus and creative interpretations of the dish in honour of the event. 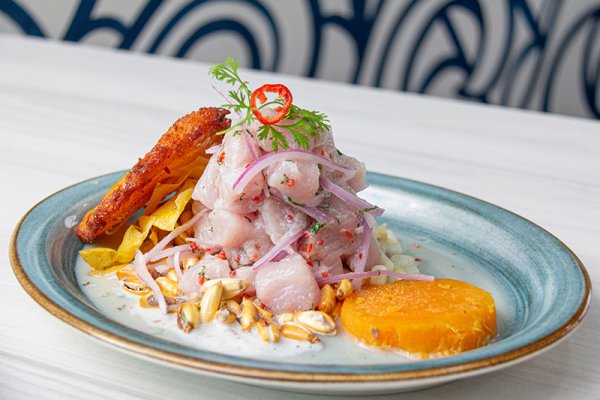 Another very famous Peruvian dish that you should definitely try is Lomo Saltado. Originating in Lima, this dish is made out of marinated sirloin steak that is then stir-fried with red onions, tomatoes and the most important ingredient, Ají Amarillo which is a hot pepper. It is usually served with rice and french fries on the side.

To create Lomo Saltado, Chinese chefs in Peru's Chinco neighbourhood took to the streets of Lima and started sautéing beef in a wok in the early 19th century. Lima's Calle La Concepcion, often known as Peru's Barrio Chino, is the birthplace of Lomo Saltado but nowadays the famous dish can be found all over the country. 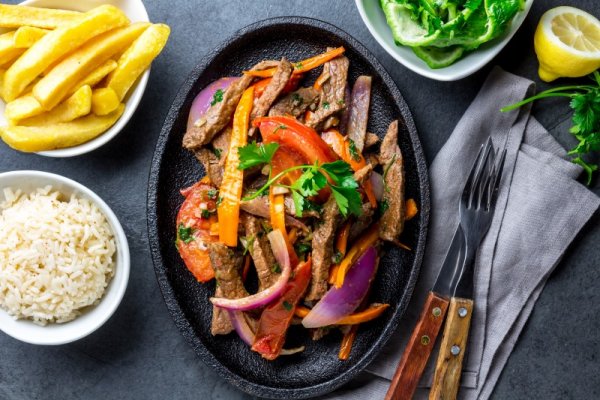 Pollo a la Brasa is the famous Peruvian style of roasting a whole chicken on a rotisserie. The dish is served with French fries and salad but most importantly with the delicious ají verde sauce that is mixed together out of cashews, sour cream, mayo as well as jalapeños to give it a bit of spice.

This is a relatively new dish in Peru and usually eaten for dinner which for Peruvians is around 8-10pm. It was first established in the Chaclacayo neighbourhood in the year 1950. Roger Schuler, a Swiss immigrant living there, studied his cook's methods and eventually tried his hand at preparing chicken. Go to one of the many restaurants in Lima that have this meal on their menu and share a Pollo a la Brasa with friends or family. 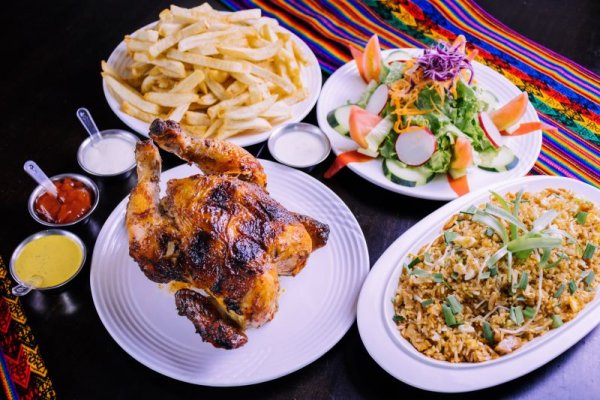 Another great chicken recipe in the Peruvian cuisine is Ají de Gallina which is made out of shredded chicken that is then wrapped in a thick sauce made out of cheese, walnut and Ají Amarilla sauce which gives the dish a fruity but also spicy taste.

The Peruvians have been eating this dish since the 16th century. Slaves from Africa brought to Peru by the Spanish are credited with introducing it. The original inspiration for Aji de gallina came from the desire to use up discarded potatoes and poultry.

This Peruvian appetizer that looks like a very interesting burger is served cold. The ‘buns’ are made out of mashed potatoes and ají amarillo, the filling usually consists of avocado and chicken or tuna.

The Incas have been given credit for the creation of the causa, as some believe it derives from the Quechua word kausaq, which the Incas used to refer to the potato and means "sustenance for life." 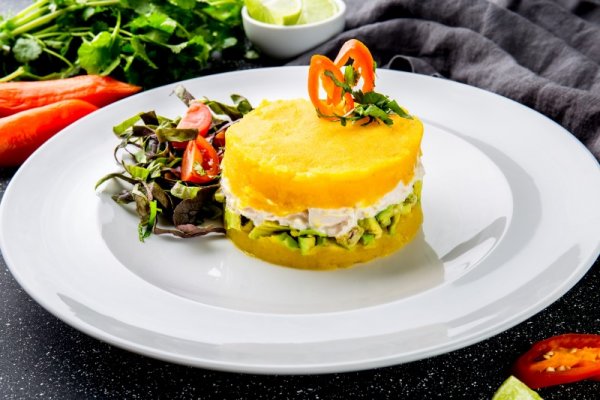 Never tried heart but really want to? Then Peruvian anticuchos is the perfect dish for you. This beef-heart is seasoned with garlic and vinegar and is very tough to eat that is why it is often flash fried for a couple of seconds to make it a bit more tender. For anyone that is not keen on eating beef heart, there are also options for marinated chicken version of the kebabs.

Anticuchos are typically consumed on the move while walking about (you can get them at restaurants, but they aren't the same) and it is very common to find these in each district of Lima.

Peru even celebrates the "Dia Nacional del Anticucho," a holiday honouring one of the country's most beloved traditional foods every 3rd of October. 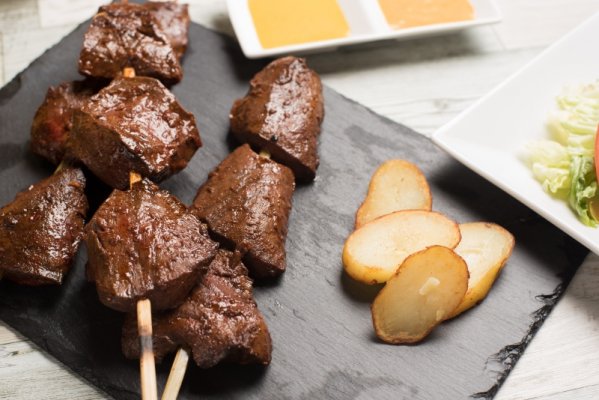 If you just want a quick and sweet snack on the go, then Picarones are exactly what you are searching for. This snack is similar to a doughnut, with a sweet but also spicy taste to them. The main ingredients are sweet potatoes and different types of pumpkins.

Picarones are one of the favourite desserts of Peruvians can easily be found in any street market in Peru. 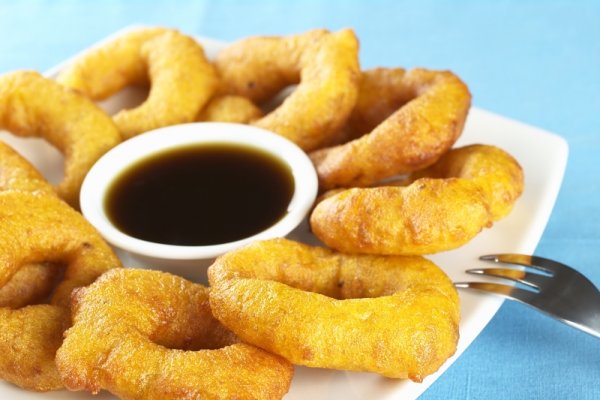 Another food that can be found in Peru is Papa a la Huancaina, an appetizer. This spicy salad dish is made out of boiled potatoes with creamy sauce served with cold boiled eggs on top. The yellow salad dressing is made out of garlic, cheese, crumbled crackers and milk.

Papa a la Huancaina, however, has a spicy flavour rather than the typical sweet or acidic one found in the usual salads. 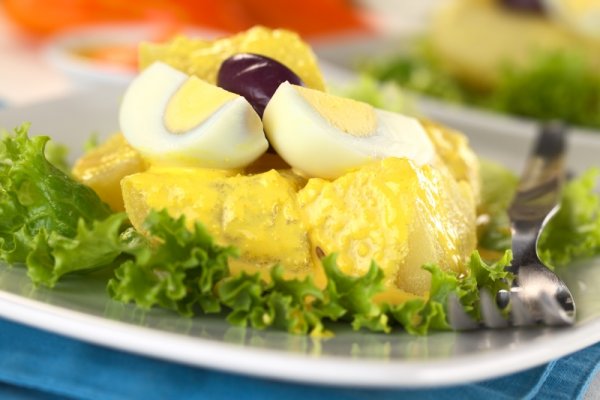 This Peruvian delicacy is made out of the rich and fatty meat of a guinea pig. Most people who try it when they visit Peru report it has a similar taste to chicken, and the meat is either cooked on traditional oven (Pachamanca) or fried. Often served whole, cuy (pronounced "kwee") is usually served with fried potatoes, corn and an ají huacatay sauce. Cuy is usually eaten with your hands, so make sure you have plenty of napkins as it can get a bit messy!

Cuy has been a staple food in Peru's Andean region for around 5,000 years. Curanderos, or traditional healers, also used cuy (and still do today), moving it over a patient's body and even cutting it open to find the source of the illness.

Cusco and it's surroundings are the best place to try the dish - look for a Cuyeria, a restaurant specialising in the preparation of cuy. 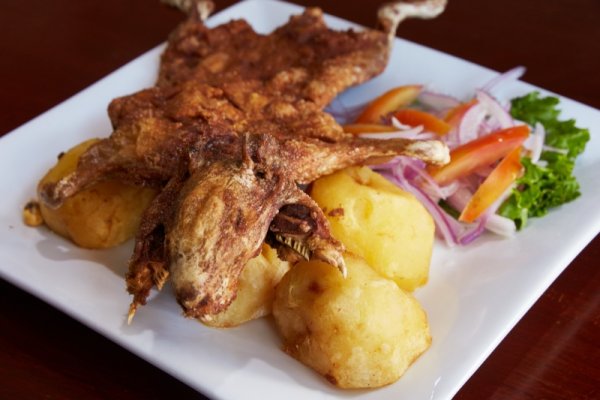 Ok, it's not really a food, but the national drink of Peru is Pisco Sour and it's so iconic we couldn't end this list of Peru's best foods without mentioning it! This cocktail is made out of Peruvian alcohol pisco -which is a distilled wine- and is mixed with brandy, syrup, lime juice and topped with egg white. The cocktail has a very refreshing taste to it and can be found in any bar across the country.

And of course, if something is as famous and beloved as this Peruvian drink it deserves its own National Day. It is honoured annually with the World Pisco Sour Day, every first Saturday in February. 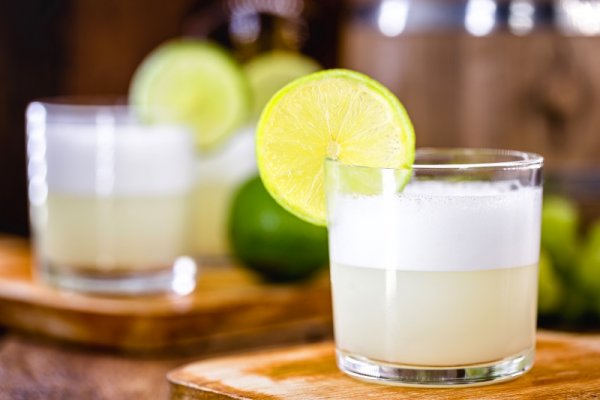 Got a taste for Peru? Taste these delicious dishes and more on our Signature Peru tour or contact our Destination Specialists to find out more.