Where to See Polar Bears on Arctic Cruises

One of the world’s most exhilarating wildlife experiences – seeing polar bears in the wild!

First-time visitors to the Arctic start their cruise research thinking no matter where they go, they will see polar bears yet, in reality, the pin-up boy of the north can be an elusive star to glimpse. Polar bears roam far and wide, often alone, stalking ice floes (or rather, the seals that live on them) across the seas for thousands of kilometres every Summer. Knowing where to see polar bears on Arctic cruises involves understanding their roaming behaviour, as well as knowing the key destinations where the largest numbers are found.

As every Arctic expedition crew member will tell you: the key to seeing a polar bear in the wild is finding their favourite meal: ringed and spotted seals. Rather than hone in on very specific ‘polar bear sighting hotspots’ on their route, Arctic expeditions cruises head to the most well-known places where seals set up colonies, close by the renowned places where they spend their somewhat lazy winters. Polar bears don’t hibernate, as such, but they do go into what scientist call a ‘carnivore lethargy’ phase. Anyone who’s ever overindulged at a Christmas lunch will surely understand what that means – polar bears hare more active hunters in Spring and Summer than they are in Winter. 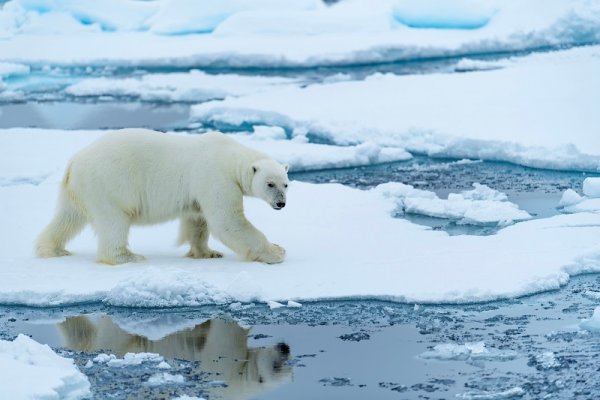 Although the majority of polar bear sightings on Arctic cruises does occur in highly populated seal hubs, you could always potentially see a polar bear, on an ice-floe in open water, anywhere in the Arctic. This possibility, albeit remote, is one of the most exciting prospects for many casting off on an Arctic expedition.

Polar bears’ very survival is inextricably linked to sea ice. In the northern European Summer (June to August), as temperatures rise, polar bears are enticed to continually travel further north in search of packed ice. For this reason, and to up your chances of seeing polar bears on your cruise, you ought to hone in on destinations that still boast plenty of ice at the time of year you plan to visit. The later in the cruising season you visit the Arctic, the further north you should be heading. 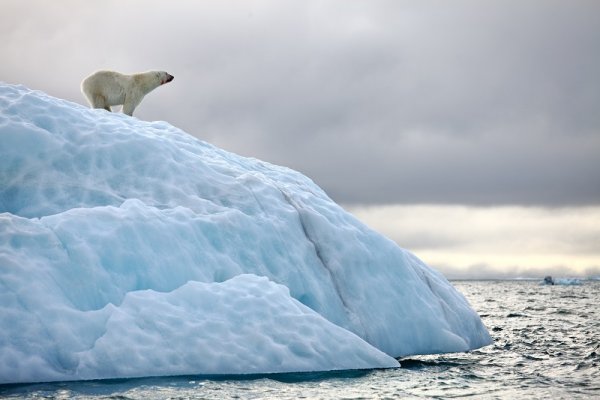 The polar bear capital of Europe and bonafide ‘bear crèche of the Arctic’, the archipelago of Svalbard and its largest island, Spitsbergen, is about the best place to see polar bears on Arctic cruises. The island is about halfway between the northern tip of Norway and the North Pole, barely 1,000km south of the latter. Over 3,000 polar bears are believed to be living on the eastern side of Spitsbergen Island and, at the beginning of Spring, they emerge from their winter snooze to indulge in an unprecedented Summer feast. At the beginning of the cruising season, your chances of seeing polar bears trawl the western coastline of Spitsbergen are excellent – and they increase the further north you cruise.

At the height of Summer, choose a circumnavigation cruise around Spitsbergen so you can visit the north and north-east coast. This is where packed-ice entices hundreds of seals to visit and they, in turn, unwittingly entice polar bears to show up. July and August are fantastic months to spot polar bears in Spitsbergen. 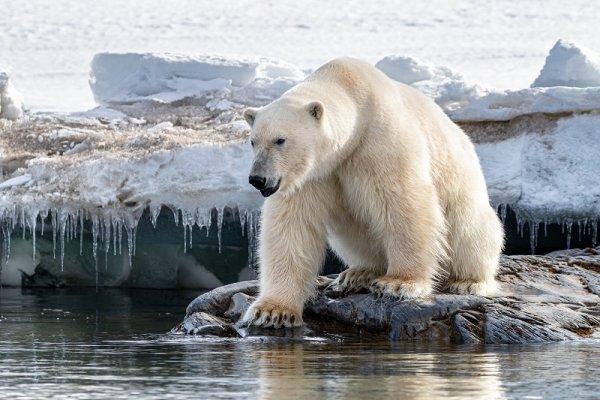 Off in the far Russian north is where you’ll find isolated Wrangel Island, the beautifully-nicknamed ‘maternity ward’ of polar bears. Every winter, hundreds of female bears head here to have and rear their young, emerging in the Summer with their fluffy youngsters in tow. Wrangel Island and the Russian Arctic, in general, are the hardest to reach cruise destinations in the Arctic and, for this precise reason, among the most coveted.

Only a handful of specially-hardcore expedition ships make it out this far every summer, with expeditions casting off in August and September, only. 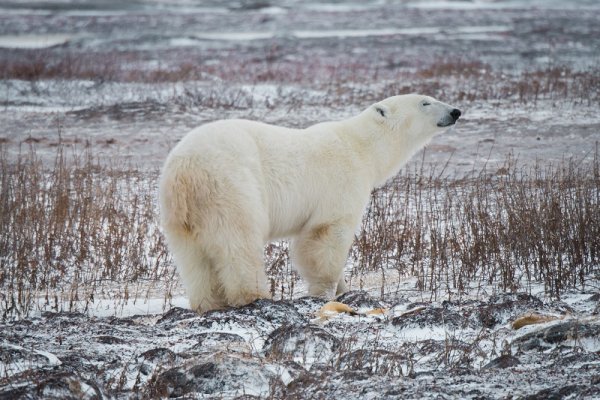 Click HERE to see our Cruise to the Russian Archipelago

The world’s largest island is almost entirely covered in ice and boasts just a few kilometres of drivable road. The wildest and most unique Arctic destination is home to plenty of polar bears although, given the sheer size of the colossal island and its remote interiors, they are seldom seen inland. Your best bet for seeing them is on an expedition cruise meandering the many dramatic fjords. Both coastlines (east and west) have delivered great polar bear sightings, although the east – being the wilder side – would perhaps offer slightly higher chances. What increases your chances here is choosing itineraries that meander the northern half of the massive island, the ones that visit from Spitsbergen. As the warmer season progresses, your chances of seeing bears in the south diminish but, if you head primarily north, we’d then place Greenland expeditions slightly above the Russian Arctic – for sheer convenience alone.

Cruises to Greenland depart from Iceland (for the southeast coast), from Spitsbergen (for the whole east coast) and from Canada (for the southwest coast). You could cruise Greenland all the way until September and have fab chances of seeing polar bears. 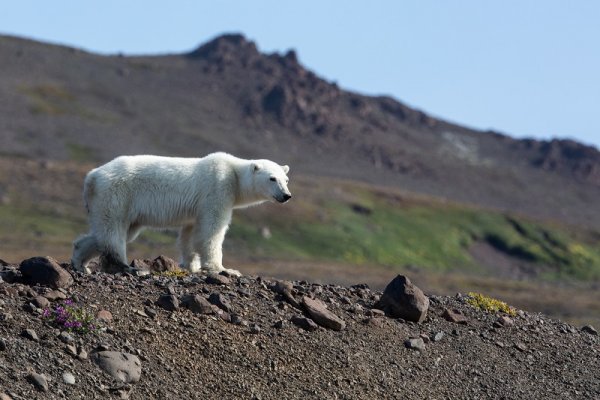 Canadian Arctic cruises also offer very good chances of spotting polar bears because, when it comes down to it, all guests have excellent chances of seeing the majestic beast, be it from the bow of their ship, inflatable Zodiacs or when kayaking among icebergs and along coastlines, no matter where they go. Canada’s Baffin Island and namesake bay are like ‘polar bay highways’ in Autumn (October & November) when bears congregate on the shores and take to the newly-formed ice to indulge in their Winter feeding-sessions. This means Canada doesn’t offer the highest chances of polar bear spotting in the Summer. By the time cruises depart, and especially at the height of summer, most bears will have already moved north, up Greenland’s west coast and all the way to Spitsbergen.

Our Canadian Arctic cruises offer a bevvy of exceptional experiences yet in Summer, and particularly the Northwest Passage expeditions, do not offer the highest chances of polar bear sightings 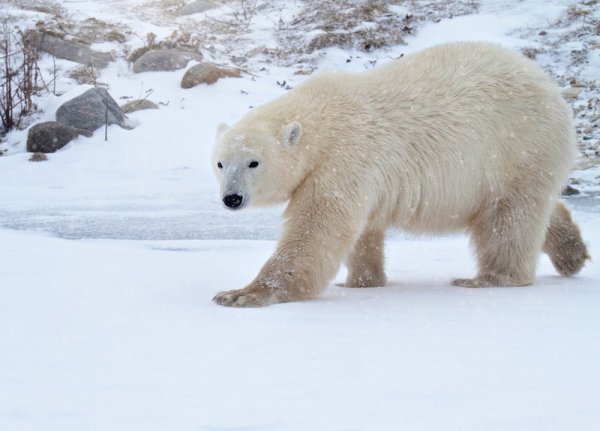 The most important point to keep in mind is that seeing polar bears is never guaranteed, on an Arctic expedition. Given that sightings are at the mercy of nature, it would be silly to assume otherwise although if you know where and when to see polar bears, your chances are really quite high.

Need some help figuring out which one of our Arctic Cruises offers the best chances of seeing polar bears when you intend to visit? Contact us here!

Planning your Arctic adventure has never been easier – here’s everything you need to know.

Why Visit Ushuaia? The End of the World is the Beginning of an Unforgettable Adventure

Patagonia Travel Guide: The What, Where, When & How!

This is your exclusive Patagonia Travel Guide: The What, Where, When & How!