When to See Polar Bears on Arctic Cruises

Every month of the cruising season offers excellent chances to spot polar bears in specific places!

Maximising your chances of spotting polar bears on Arctic cruises is as much about timing as it is about the destination: When to see polar bears is as important as where to see them. Yes, you should be choosing the best-known destinations where the poster-child of the Arctic is often seen, but you also need to time it right. To gain a better understanding of polar bear spotting in the Arctic, you ought to refer to our Where to See Polar bears on Arctic Cruises piece as the combined knowledge of place + time is what will help you determine the very best time for you to plan your expedition to the north.

There’s also an extra choice you can make to further increase your chances of seeing Polar bears, one that has nothing to do with either time nor place. But more on that below. 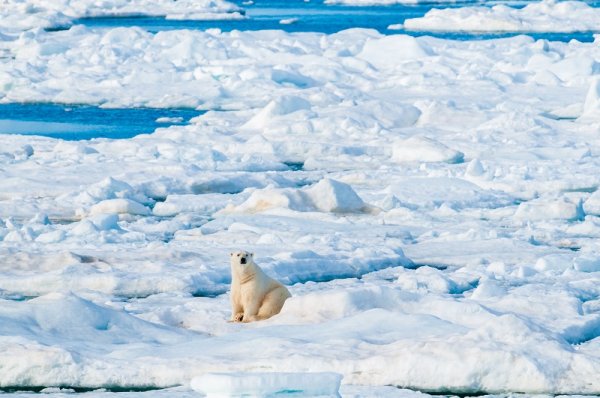 Polar bear sitting on the ice pack in the Arctic Circle

Arctic cruises cast off from early June every year, a time when pack-ice around coastlines has melted sufficiently to allow ships to meander freely. The later in the season you travel, the more extensive the itineraries – early season expedition cannot reach the northernmost reaches of the Arctic, for example, because the ice will be substantial. July and August are the warmest cruising months, with the highest degree of ice-melt throughout the region and even 24 hours of daylight. By the time the last cruises enjoy their jaunt, in mid-September, ice will have once again reformed, temps will have dropped and those magical sunsets will have returned, with the added bonus of possibly Northern Lights spotting as well. 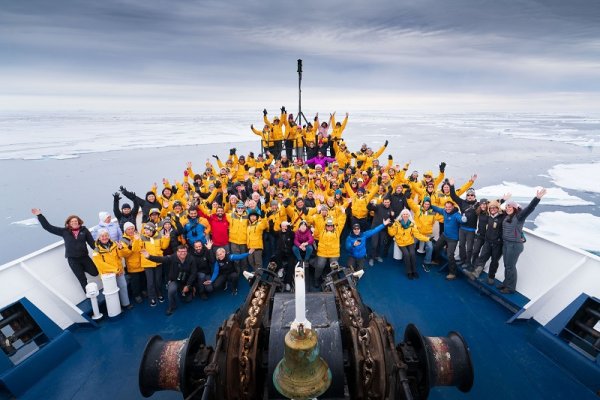 The Wanderings of Polar Bears

Polar bears and ice go hand-in-paw, the majestic king of the north basing its entire life and feeding cycle around packed ice and subsequent yearly melt. This means that to have the highest chances to see polar bears, you need to follow the ice. As Summer progresses and ice melts at an increasing rate, you’ll need to head further north. Just like the polar bears. In essence, different parts of the Arctic offer excellent chances of seeing polar bears at different times of the year.

The later in the cruising season you visit the Arctic, the further north you should be heading! 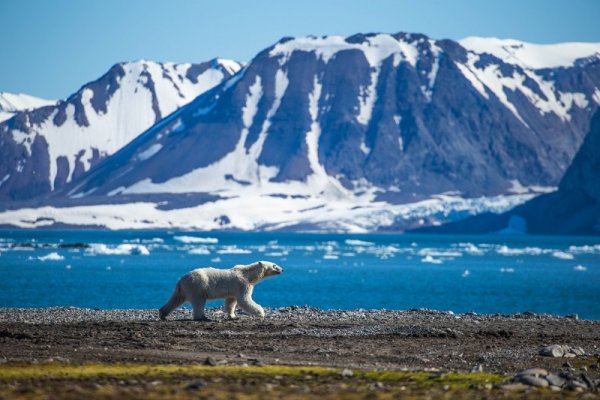 June sees the start of the cruising season and although sufficient ice melt has occurred, your expedition ship will still be crunching through a mesmerizing mirror of sea-ice as it sails away. Temperatures are still quite low and ice abundance this month but, more importantly, it’s a time when polar bears take to the sea ice to travel north, in order to feed on seals with abandon after their Winter semi-fast.

June is the best month to see polar bears floating on ice in open water, as they travel steadfastly to reach renowned seal colonies on which they will hope to feast. This is true of all the Arctic cruising destination. 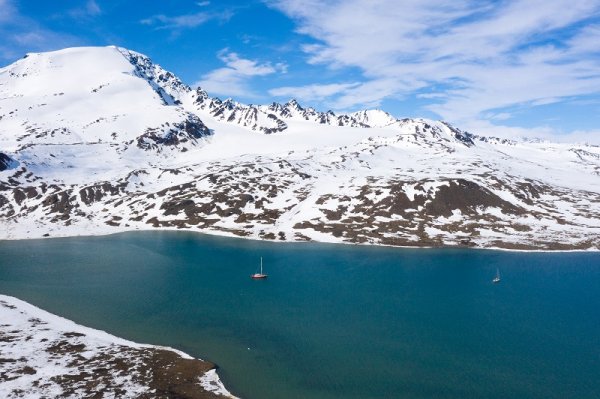 By the time the height of summer arrives, polar bears will have reached seal colonies, most especially in the northern half of Spitsbergen Island in the Svalbard archipelago, whose islands and seas are home to an estimated 3,000 polar bears. 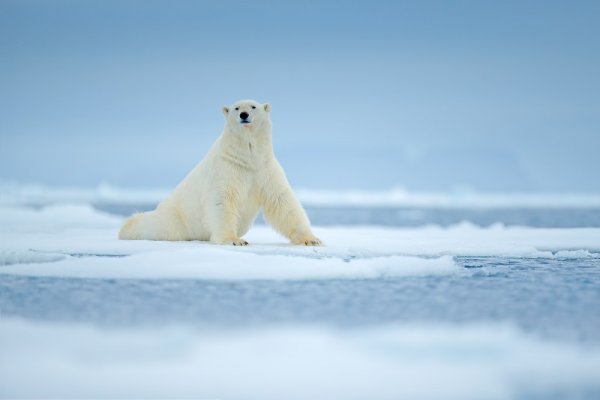 Sea-ice will be less of an issue for cruise ships now and, in the southern reaches of Iceland and Greenland, will be just about gone. This means you’ll want to head further north if you want the highest chances of seeing polar bears hunting – if choosing to cruise Greenland, then opt for an itinerary that departs Spitsbergen: not only will you have fantastic chances of seeing polar bears on Spitsbergen, but you will also explore the north-eastern coastline of Greenland, where bears are more likely to be. 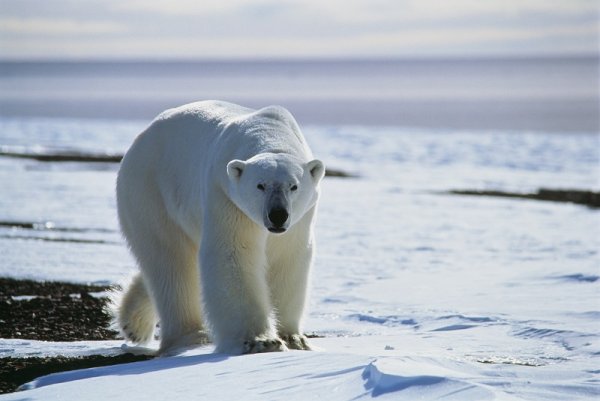 Click HERE to see our Iceland and Greenland Cruises

Over on the Russian High Arctic, and especially the marine-life brimming Wrangel Island, July and August see an absolute hive of fauna activity, which attracts polar bears in their droves. This remote and hard-to-reach island is considered the world’s ‘polar bear maternity ward’ and is one of the last true unspoilt corners on our entire planet. Fiercely protected, Wrangel is visited by just a few lucky ice-strengthened ships every Summer.

Many assume that July and August are not good times to see polar bears because of the excessive ice melt but, in reality, it means that polar bears will be concentrated in high numbers in only a few select spots where pack-ice still remains.

The trick is to find that ice and logic dictate that it will be as far north as an expedition ship can go! 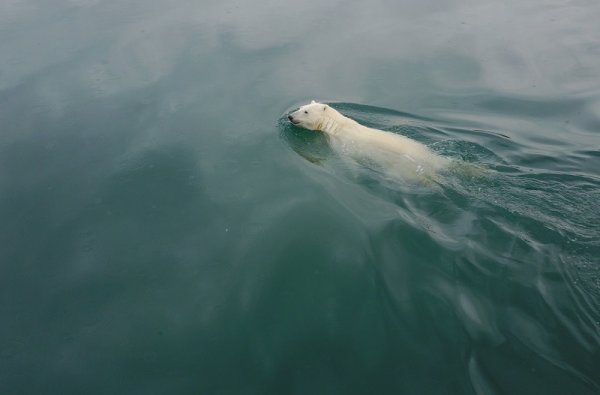 September is an exceptional month to tackle the craziest and longest sailing challenges in the Arctic – this is the month for Northwest Passage cruises, for example, or itineraries that meander between Iceland and Greenland in the hope of spotting the dancing lights of the Aurora Borealis. Given that these cruises are only possible due to the maximum yearly ice melt, it figures that they don’t offer the very best chances of seeing polar bears. For many, however, the rewards of such magnificent rewards far outweigh the drawbacks, especially when you consider that, although slim, you could always spot a nomadic polar bear no matter when and where you go in the Arctic. 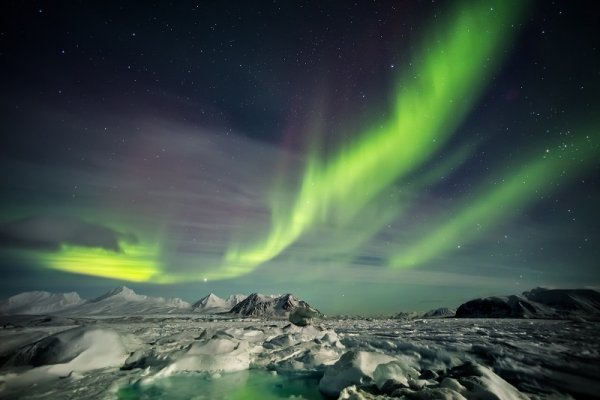 Choose the smallest ship you can afford!

Timing and destination play a huge role in your chances of seeing polar bears but so too do being aboard a small and compact expedition ship, one that can explore narrower inlets and coves where the bigger ships cannot go. On smaller ships, you can also sail closer to coastlines and iceberg, which is priceless when you consider most polar bear sightings are along the Arctic coastlines and atop flowing ice. Small ship cruising is ideal for innumerable reasons: aside from more in-depth itineraries, they also offer a much more intimate experience and have been found to be more environmentally-friendly. Primarily, however, small ship Arctic expeditions offer more rewarding wildlife watching, with more time on Zodiacs offered to each guest and more personalised service overall. 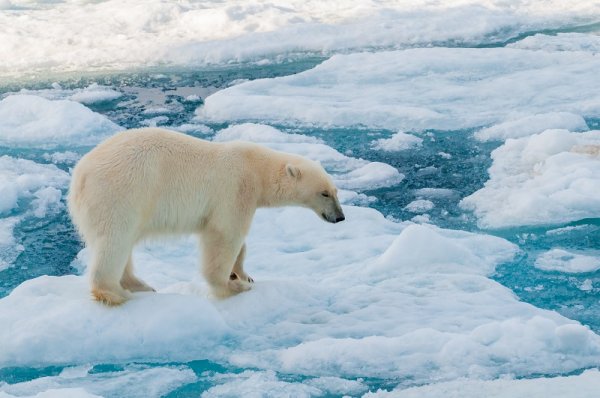 Arctic expeditions are among the most mesmerizing wilderness and wildlife adventures in the world – and seeing polar bears is but one of the many unforgettable highlights. Although no expedition could ever guarantee a sighting, do know that most guests will see polar bears in the Arctic and we’ve enjoyed all sorts of sightings, from solitary bears on ice floes to big groups of famished beasts stalking a seal colony.

If you’d love to speak to a specialist who’s been on an Arctic expedition and can advise you on the best time to visit the best destinations, contact us today.