Whale Watching in Antarctica – The How, the What and the When!

Check out our collection of Antarctica tours here.

The single most dreamed-about experience and the one we receive the most queries about, whale-watching in Antarctica is as easy as, well, getting on a ship and heading south! Antarctica is one of the world’s top whale-spotting meccas yet knowing more about it when to go and what you should be keeping an eye out for, will greatly enhance your experience. 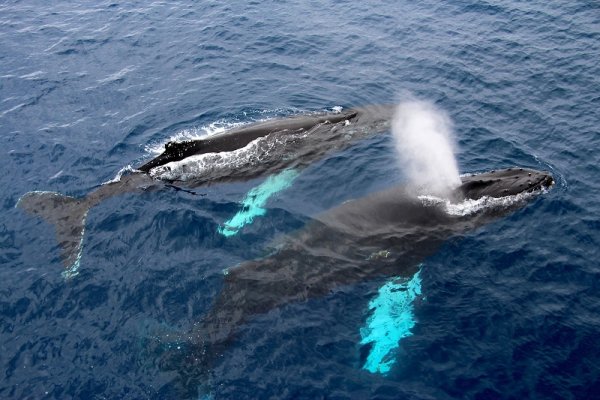 Whales swimming together in Antarctic waters

What kind of whales can you spot in Antarctica?

Include whale watching in one of these Antarctica tours!

During the southern summer (October to March) there are about 10 species of whales that migrate south to Antarctica to breed and feed. Head on an Antarctica tour and your whale-watching exploits can start from the get-go, from the moment you cast off from your departure point, especially if you choose a cruise departing Ushuaia. It’s quite common to start spotting whales along the Drake Passage before you even get to the Antarctic peninsula.

Whilst your chances of seeing whales are great, there’s no predicting which of the 10 species you’ll see. 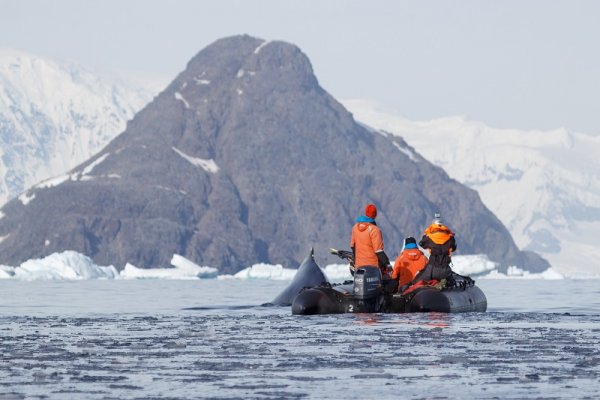 Active, acrobatic and impressively large, the humpback whale is the main show pony of Antarctic waters, the one everyone wants to see. Renowned for their hauntingly beautiful songs, which can last for 20 minutes and reach distances of up to 32km, the humpback is a beloved study subject for scientists, who are still trying to determine if the vocalization is, as suspected, a courtship serenade. Amazingly, these enormous beasts are quite curious of both ships and zodiacs and experiencing an up-close encounter is quite common, which makes them all the more coveted. 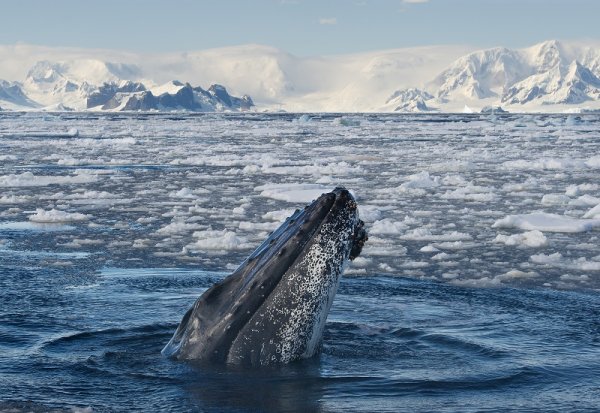 Humpback whale in the icy waters of Antarctica

A smaller but equally curious cousin of the humpback, the minke whale is just as active, often breaching and coming close to ships to suss out the new arrivals (ie. you). The minke is known to perform aerial acrobatics, albeit rarely. They are often mistaken for orcas at first sight (they both stick out their snout vertically out of the water to breathe) although the distinct lack of white patches will help you differentiate them. There are an estimated 750,000 minkes in the world, the most prolific baleen whale species of all. 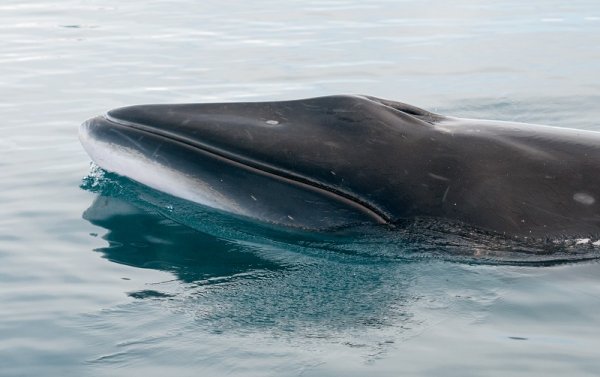 Whilst technically a dolphin, the killer whale is usually bunched up in whale-watching guides and certainly looks more like a whale than a dolphin, so we’ll also follow suit and include it here. Over 75% of the world’s orcas trawl the Antarctic waters and are perhaps the most beloved whale in the world. These formidable hunters are actually named for their predilection for hunting and eating smaller whales, which is where their name originates – killer whales as in ‘the killer of whales” which is something not many people know. Orcas live and travel in large pods, they’re very sociable and are known to coordinate efforts to hunt seals in packs. They’re extraordinary to see and immensely rewarding on whale-watching Antarctica tours, especially if you happen to spot them when they’re out looking for a feed. 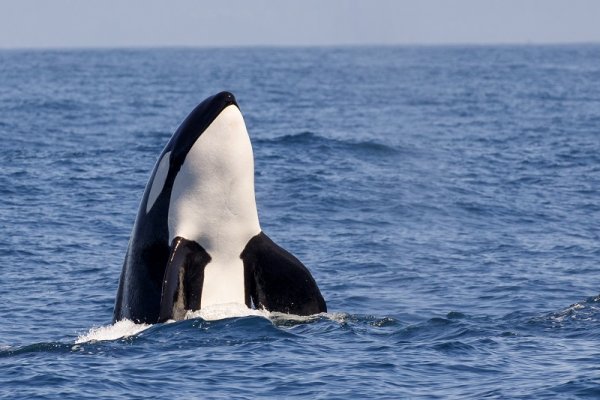 Killer whale jumping out of the water in Antarctica

An unfortunate name for such a magnificent creature, the southern right whale was one of the most hunted during the height of global commercial whaling, which is where the ‘right’ in its name originates. They were the right whales to hunt thanks to their slow speed and abundance of blubber. Today, less than 10,000 of these gentle giants remain in our southern waters yet their propensity to cruise the surface of the water and perform their mesmerizing tail waves (which northern right whales curiously don’t do) make them immensely rewarding to spot. 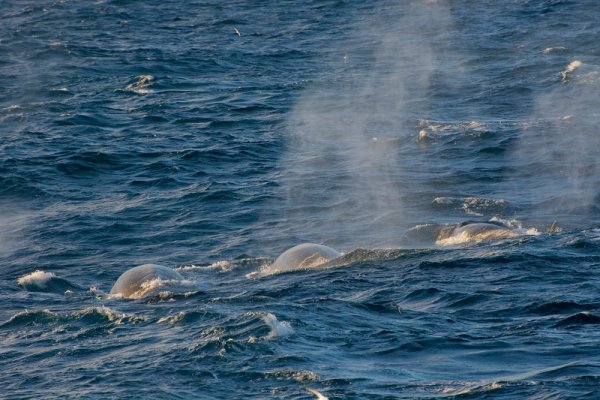 If whale-watching in Antarctica is akin to a travel lottery win, then consider spotting a blue whale like winning the lottery, two weeks in a row, with the same numbers. Yes, it’s rare to see the largest animal that has ever lived on the planet and one of the most endangered wildlife of all. But oh boy, if you do…photo or it didn’t happen! 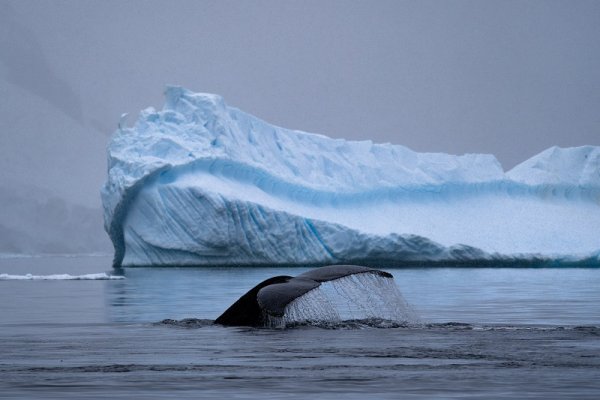 What’s the best way to see whales in Antarctica?

Heading to Antarctica on an expedition cruise from Ushuaia will offer the highest chances of whale-spotting, considering that delightful (or not) Drake Passage is the first destination you may spot them on your way south. Of course, whales could pop up at ANY time and that’s why all cruise ships have extensive viewing decks (both indoor and outdoor) offering you infinite chances to sit, relax and keep your eyes peeled to the sea. When it’s time to get off the ship and explore, you’ll be heading off on zodiacs, which are sturdy inflatable vessels designed for the tough Antarctic conditions. Zodiacs are just marvellous as they allow you to reach inlets where whales may be but your ship can’t get to. Then there are the kayaking excursions which you absolutely should consider when on an Antarctica tour. It is simply A.MAZE.ING. to be so close to the sea, gliding along quietly as can be, exploring icebergs and just seeing if there’s a whale or 10 nearby. This is heart-pumping stuff to the max! 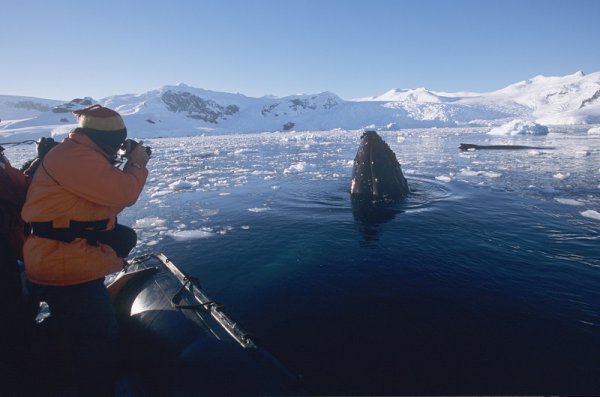 Tourist taking pictures of a whale in Antarctica

Other than that, you can also easily spot whales when you’re onshore and do rest assured that your captain and crew will always try the hardest to deliver the most lifechanging travel experience of all – they know the channels and inlets where whales love to huddle up and, weather permitted, they’ll take you there.

When’s the best time to spot whales in Antarctica?

Late in the cruising season, during the months of February and March, is considered the very best period for whale-watching in Antarctica. It takes a while for all the mighty beasts to congregate this far south so at the tail-end of summer you’ll have the highest chances of seeing the biggest numbers and greatest variety. February and March are actually awesome months for Antarctica tours in general: cruises are cheaper than during the peak period, availability is higher, there are fewer chances of ice blocking your cruising route or landing sites and, at this time, you can soak up the spectacle of Antarctic sunsets. If that’s not enough, there’s the wildlife factor: there are more fluffy penguin chicks and seal pups waddling about and, of course, all those magnificent whales to see. 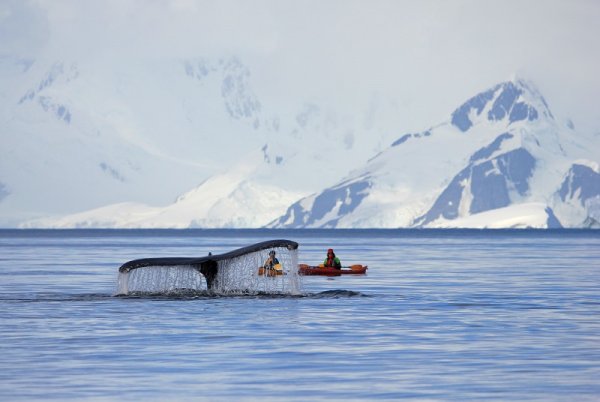 Tourists kayaking close to the whale in Antarctica

Even those who aren’t much into photography come home from an Antarctica tour with thousands upon thousands of shots. It’s just what happens when the landscape is that amazing and the wildlife so prolific. If you know your way around a camera and have a fir idea of what to expect, great! If not, here are some useful tips: 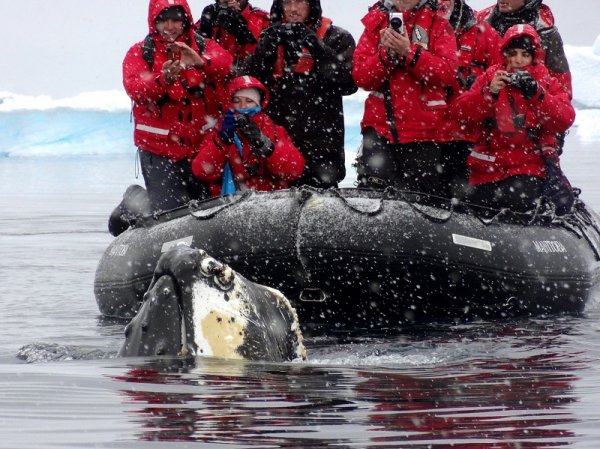 Whale protection and conservation in Antarctica

Back in the early 1900s, the Southern Ocean around Antarctica was a frenzy of whaling and fishing activity – our global thirst and hunger sending some species to near extinction. Twenty years ago, however, the world set up SOWS, the Southern Ocean Whale Sanctuary, meant to protect and preserve the whale species who call these waters home. Bar a few exceptions (most notably of Japan, who claims to do it for research) commercial hunting of whales in these seas is prohibited and scientists have recorded a moderate increase in whale numbers since the moratorium was introduced. You can read more about SOWS, right here.

The popularity of whale-watching expeditions – especially in Antarctica – is proving to be one of the biggest enticements for whale protection, even by countries which were avid whale-hunters for centuries. It is hoped that responsible tourism in Antarctica will continue to flourish, keeping these amazing creatures in the spotlight and help convince all governments that what we all want is to SEE whales in the wild, not kill them.

Join us on an expedition tour of Antarctica and come meet the most awe-inspiring creatures on earth.