The weirdest wildlife in the Galapagos Islands

We’re not saying that the unique creatures of the Galapagos are a bunch of weirdos but, to be brutally honest, they really are. Between the waltzing bird, the cannibal crab, the freediving lizard and the turtle that takes the intermittent dieting fad to epic levels, the issue isn’t finding bizarre wildlife on your Galapagos tour…the issue is finding ones that seem totally ordinary!

Your challenge, if you wish to accept it, is to pack your bags, head on over to South America on a whirlwind wildlife-spotting tour and come meet some of the world’s most distinctive, confounding and awe-inspiring animals.

The weirdest wildlife on the Galapagos Islands? That’s just what happens when nature is left to evolve to her own beat.

The master of its domain, the Marine Iguana lives as contentedly on land as it does out at sea, the only lizard on earth that takes to swimming so naturally. Diving to depths of 30m, marine iguanas survive by holding their breath underwater, an impressive feat they can keep up for up to 30 minutes at a time! Stranger still, they have the ability to extract salt from sea water, which they expel – rather speedily – from glands located right next to their nostrils. These guys sneeze salt! What’s really amazing about these aquatic lizards, however, is the fact that they can shrink and grow in size depending on the climate and availability of food, a stunning and very unique adaptation to El Nino which scientists have only recently discovered. 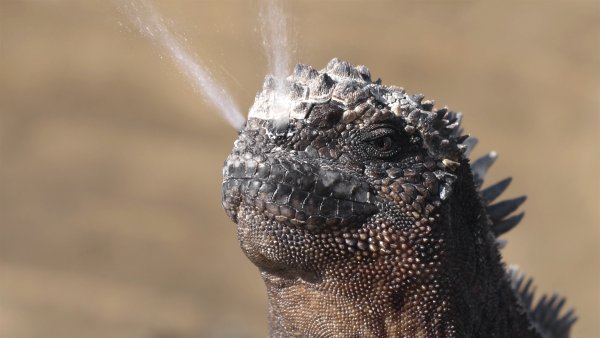 Iguana in the Galapagos

It is often said that every group needs a clown and, in the case of the Galapagos wildlife, that honour befalls the dude with the blue floppy feet. This adorable bird with the cute name is one of the Galapagos’ most beloved creatures, its sweet waddle and ever-startled expression making it seem more like a satirical caricature than an actual animal. Used to shelter chicks in the first few weeks of life, the wide, floppy, bright blue feet of the Booby are an essential tool for courtship, being waved around in a waltz-like dance that is beyond gorgeous to see. Witnessing this mesmerizing courtship display is one of the most rewarding wildlife spotting experiences you can have on a Galapagos cruise. Interestingly enough, the name Booby derives from the Spanish’ bobo’ – which means clown – a most apt wildlife name if ever there was one. 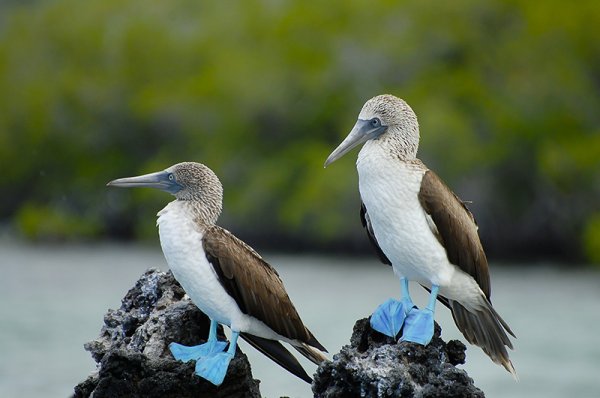 This cunning scavenger feeds on whatever it can find (sounds eerily familiar), including ticks which stubbornly hang on to marine iguanas and even devouring fellow crabs, both dead and alive (at least I draw the line at ticks and live crabs though, to be honest). The greedy guts of the Galapagos are not unique to these islands – they can also be spotted along the Central and South American western coastline – yet here they play a pivotal role in the ecosystem, keeping it clean and waste-free. Agile, swift and beautifully tinted, they are among the most photogenic subjects you’ll discover on your Galapagos cruise. 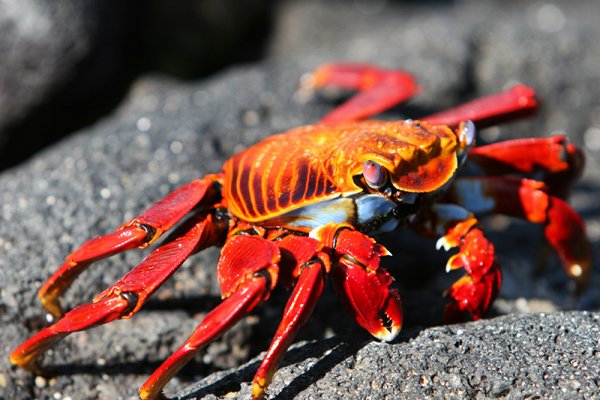 It may look like it’s been hit in the snout with a ginormous hammer – part of the reason it makes such a great character in animated movies – yet this comical creature is one of the most formidable hunters of the Galapagos seas. A cunning and lightning-fast predator, the hammerhead shark has the ability to see both below and above itself thanks to its wide-set eyes so it’s an animal that’s impossible to sneak up to. Luckily, they are docile and not known to attack humans and are the main drawcard for SCUBA divers on Galapagos cruises. They’re also particularly rewarding to see in the Galapagos because they congregate in tremendous numbers here, up to 100 individuals, something that only occurs in a few rare places on earth. For divers and snorkellers, this makes for a Galapagos wildlife-spotting extravaganza. 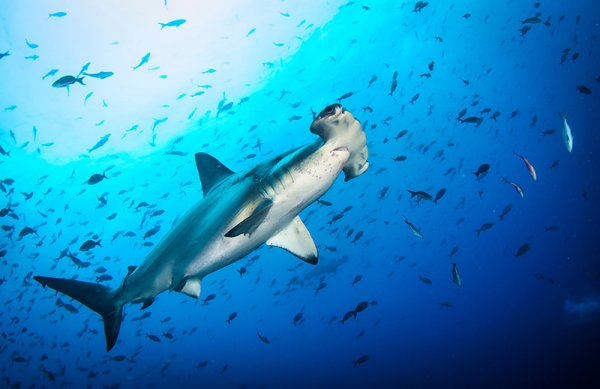 If the Galapagos can be said to have a King in its jungle (or rather, its volcanic rocky outcrops) than the Giant Tortoise would have to be it. Living to a staggering age of 100 years on average (the highest of any vertebrate on the planet) the magnificent Giant Tortoise is the poster child of these incredibly unique islands. Aside from age and size (they can grow up to 1,5m in height and weigh as much as 230kg) its most impressive superpower is the ability to go without food or water for 12 whole months.  During the days when whaling was so prolific in this region, this made them a very desirable food source for seafaring visitors and is the primary reason they are now endangered. So many were taken on board as live food that certain islands have been left devoid of their specific breed. In total, the Galapagos is thought to have been home to 18 very distinct species of Giant Tortoises yet, nowadays, only 14 remain.

This outstanding archipelago may have been a hub for pirates and whalers in years gone by but today the Galapagos are fervently protected – and so are all the weirdest creatures who thrive on their nutrient-rich waters. Wildlife conservation initiatives in the Galapagos are not only comprehensive but also ever-growing, many involved with protecting the weakest species, the ones most at risk from imported predators such as rats – believed to have been carried over via ships in the 18th century.

For Galapagos cruise passengers on wildlife-spotting trips, restrictions apply as to when and where they can make landfall, how many guests can disembark on an island at any given time, and which islands they are allowed to visit. This is nothing new here, the Galapagos comprising a protected national park that’s considered the world’s primordial responsible-tourism destination – conservation initiatives have been in place here for almost half a century, long before the term ‘eco-tourism’ ever became mainstream. We hope the Ecuadorian Government continues to strive to keep these islands pristine and unspoiled and we’ll certainly continue to operate following the strictest regulations for tourism operators. It’s the very least the weirdest wildlife on the Galapagos Islands deserve.

The best way to see wildlife in the Galapagos

Given the number of islands, their distance and the above-mentioned restrictions, the best way to see wildlife on the Galapagos is on dedicated wildlife-spotting cruises. Small ship cruising here affords the best of it all: less time travelling (as most sailing is done at night), more time on land and more time SCUBA diving and snorkelling in search of the fascinating marine life for which this place is legendary. We also offer a few excellent island-based tours (if you’re not a cruising fan) and although your wildlife-spotting experiences will not be as comprehensive, lodge-based stays (whereby you take day trips out to nearby islands) are still immensely rewarding.

Because as we love to say: even just a single day in the Galapagos is better than 100 days anywhere else on earth. 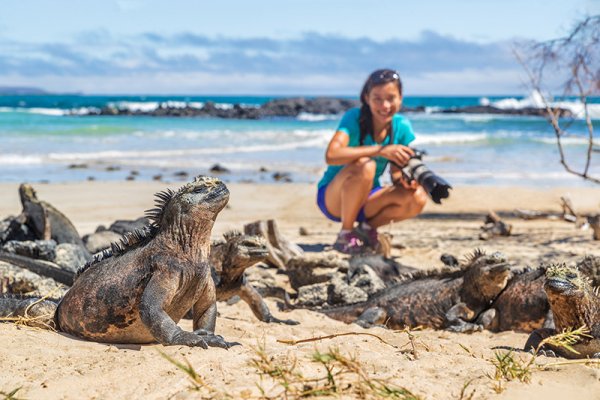 Tourist taking picture of an Iguana

Check out our comprehensive collection of Galapagos Islands Tours and find out more about this exceptional destination on our blog site, including the Best Time to Visit, Best Galapagos Cruise Ships (Why Size Matters) and useful tips on How To Get The Most Out of Your Visit.

As always, we’re here to answer any question you may have. If a Galapagos wildlife-spotting cruise is on your bucket-list, make TODAY the day you do something about it! Contact us, right here.