In early November I flew with Air NZ to Buenos Aires, where I spent a couple of nights, before flying to Ushuaia to board the Ocean Endeavour who would take me to one of my dream destinations, Antarctica. I was ready for a 10-day expedition cruise to visit the 7th Continent. I travelled on my own and was sharing a cabin with another female traveller. 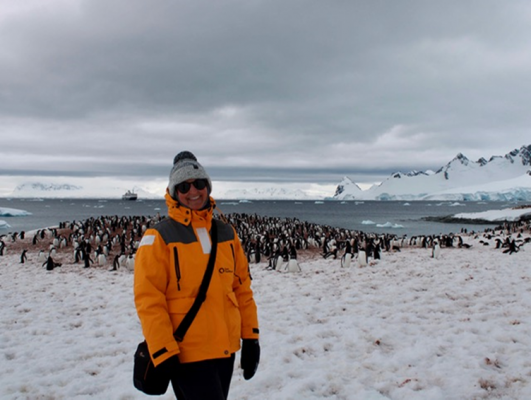 It is not unheard of that airlines have delays or sometimes luggage is misplaced etc. To avoid this extra stress, I recommend having an extra night or two in Buenos Aires. A great city where there is so much to see and do.

I spent two nights in Buenos Aires. The second night and also the flight to Ushuaia was included in the cruise cost.

My first night/day I spent in Palermo Soho where big trees line the streets. It’s the neighbourhood of fashion and design stores, street culture, bars and alternative restaurants where I enjoyed a great Argentinian Asado. The next day after check-out I transferred to the ‘cruise’ hotel which was in the San Telmo district. I dropped off my bag at the hotel and then did a half-day cycling tour, which I can strongly recommend. The tour finished in the late afternoon and I went back to check-in at the hotel. I opened the door to my/our room, and this is when you meet your cabin-mate (if you share).
I noticed some fellow travellers weren’t aware that they had to share the hotel room on that first night, hence it was a bit of a surprise to have someone, you have never seen before, walking into your room you believed to have to yourself. – So be prepared

Later in the afternoon I met the cruise representatives and received the boarding pass, luggage tags and more instructions when to be ready the next morning!

2) Arrival in Ushuaia and Embarkation

The flight to Ushuaia is quite likely to depart pretty early, especially if you are booked on a charter flight! Most flights will depart from AEP Airport, which is the domestic airport and closer to the city centre, so the transfer is short.

On arrival in Ushuaia, we had some free time. It was very cold and snowing, but with my new travel companions we ventured out to explore the world’s southernmost city. You can collect a stamp for your passport, walk to the famous USHUAIA sign, visit the little museum and spot seals in the harbour. If you are hungry, enjoy some famous king crab, sea bass or large mussels. You can also do some last-minute shopping for warm clothes or practice posing with a penguin ...

Make sure you get back in time to the meeting place and get ready to board the vessel! In case you have been wondering where your luggage is, the expedition operator is taking care of that. So, make sure you bring warm clothes, personal items and your passport with you, everything else you can leave in your luggage.

3) On our way across the Drake

The big moment is here. We are on our way across the Drake to Antarctica. We had a welcome briefing with our Expedition Leader Laurie and the introduction of the team of 30 staff. Soon after we all got ready for the safety briefing, it was bitterly cold and windy outside, and we were all glad to head back inside asap.

It took about 5 hours before we headed into the open sea and the Drake passage. The ship doctor onboard recommended to take some motion sickness medication as a precaution. For travellers who didn’t have any, they were available from the doctor. I took one tablet before going to bed. The rolling motion sent me to sleep and I only got woken up a few times when the ship rolled a bit more. We were lucky, as it was only a moderate swell.

During the day we listened to interesting presentations on Antarctic history, photography and natural history of penguins. We also attended more introductions/briefings on different activities offered, such as sea kayaking, stand up paddle boarding, paddling, skiing and yoga.

In between there was time to step outside and watch the amazing sea birds soaring around the vessel.

Ushuaia disappearing in the snow and fog … 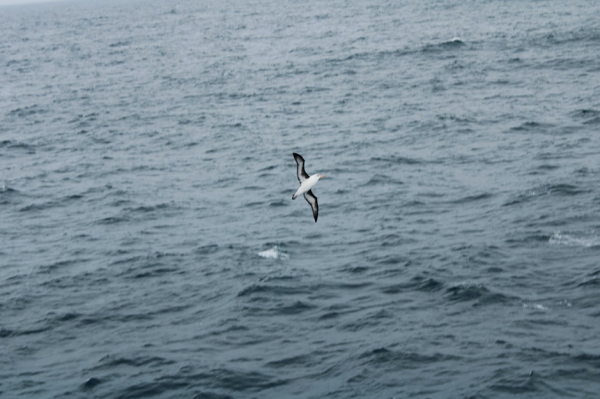 Albatross in the Drakes Passage 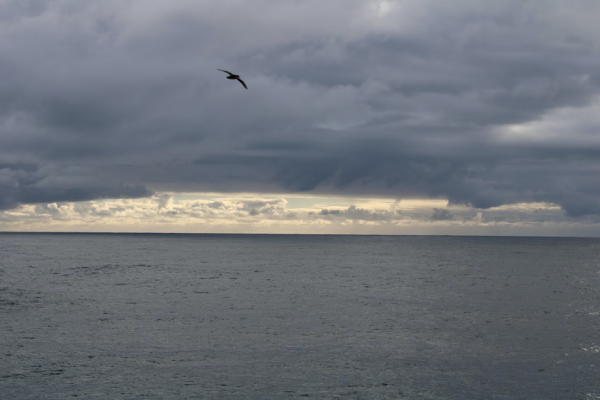 4) South Shetland Island and sighting of the first iceberg

By now the weather had cleared and the sea calmed down further. The temperature was around 0°C and we enjoyed spending time on the deck. Then, with great excitement the first iceberg was sighted in the distance! Soon we got closer to the South Shetland islands and reached Barrientos Island, our first landing sight. We all got put into different groups and had to be ready at different times, this meant no waiting around. 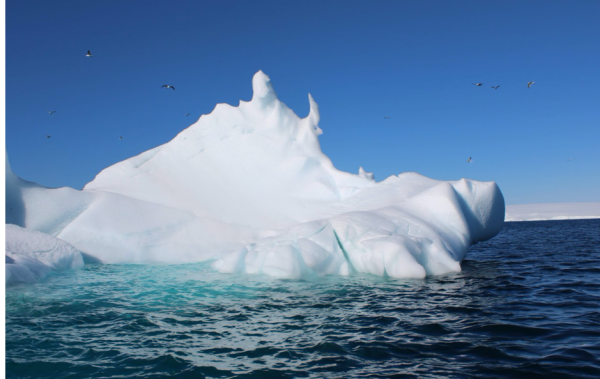 Iceberg in the Antarctica

5) Getting ready for the first zodiac excursion – what to wear?

On our first day we also tried on our windproof jackets and made sure we had the right size boots and stored everything in the mudroom. This is the place where you get dressed and ready, before lining up for the activities. The question now was, how many layers am I going to need for this outing?? I decided on a merino t-shirt, long sleeve thermal top and polar fleece on top. Merino long johns, warm hiking pants and two pairs of warm hiking socks. Then I made my way down to the mudroom, that’s where I put on my waterproof pants, thick jacket, life jacket and then neck gaiter, hat and two pairs of gloves and of course sun glasses … then you walk or more waddle off to get onto the zodiac.

Being there early in the season meant there was still snow on most places on the ground and the penguins were claiming nesting sites on elevated areas. Seeing so many penguins coming in and out of the sea, climbing steep slopes, building nests, stealing rocks/stones and squabbling amongst themselves, was like being in a wildlife documentary.

The sun was shining and the steady breeze blowing .. you might wonder if I was overdressed? Not at all; I still had ice cold hands but most importantly those big boots were super comfortable to walk in and even more importantly: warm! 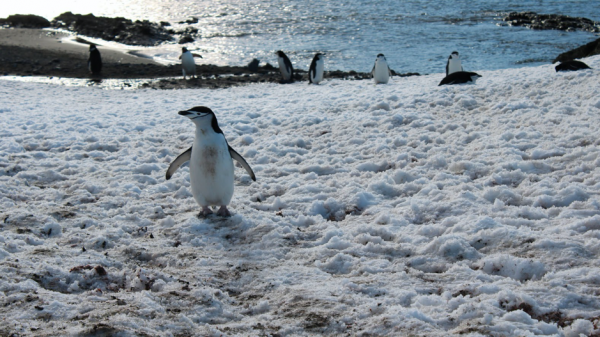 Chinstrap Penguin in the Antarctica 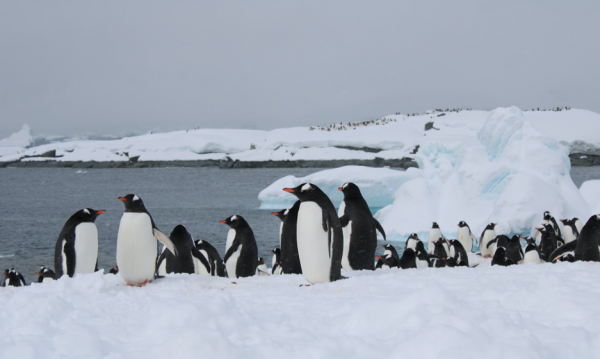 7) Zodiac Rides – where best to sit

Each day two landings were planned and usually, each landing meant an actual landing on an island and a walk/hike and then an hour or more zodiac cruise around the area to check out icebergs close up and spot wildlife.

These rides are great but can also be bitterly cold and wet! I remember from my Galapagos trip that sitting in the front meant you get the wettest. Hence I made sure to get a place near the middle or at least not at the front … having someone sitting in front meant not just getting wet but also someone was giving you shelter when there was a bitterly cold wind blowing! 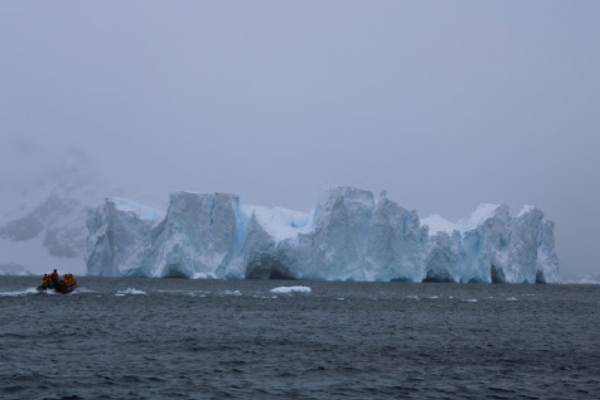 Boat ride to the Island landing 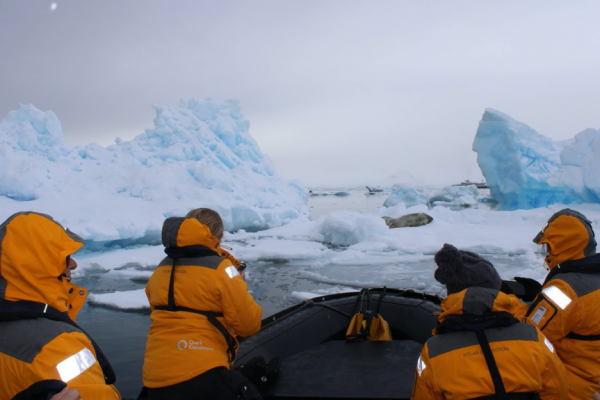 8) Islands and locations visited on during the cruise – flexibility required

Barrientos Island in the South Shetland islands was our first landing sight, it was a nice sunny day and everything went according to plan. Once we arrived at the Antarctic Peninsula the sea was a bit rougher at times, ice blocked passages, the wind and white caps on some days were too much for our activities. The expedition leader and the captain usually managed to find alternative landing sites. We managed seven out of eight landings. Unfortunately camping got cancelled due to high wind and rough sea.
We managed to land at the famous Neko Harbour, snow was falling, and the penguins didn’t seem to mind; it looked beautiful. We also managed two landings on the mainland, the last one was at Portal Point where we stepped on the 7th Continent!

We had a lot of changes to our original itinerary, but it actually didn’t really matter as we still made the most out of each location we visited. 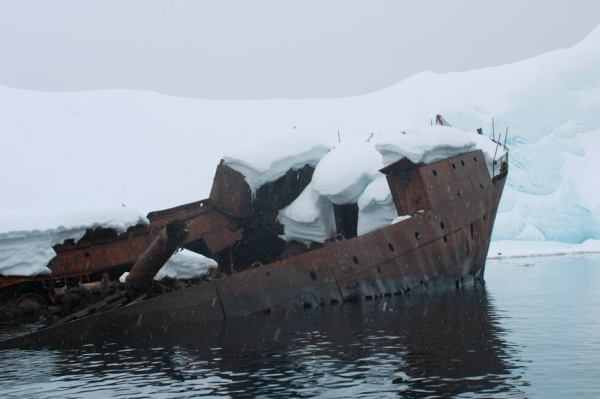 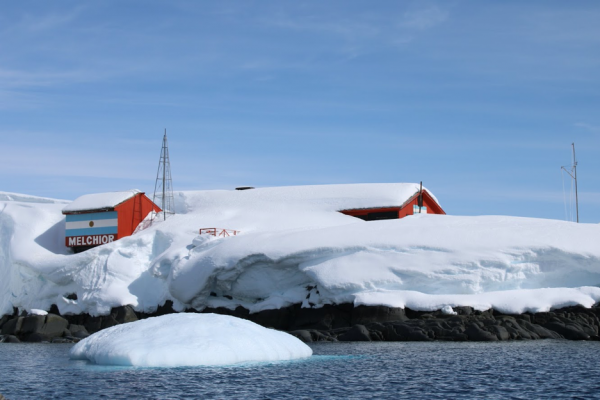 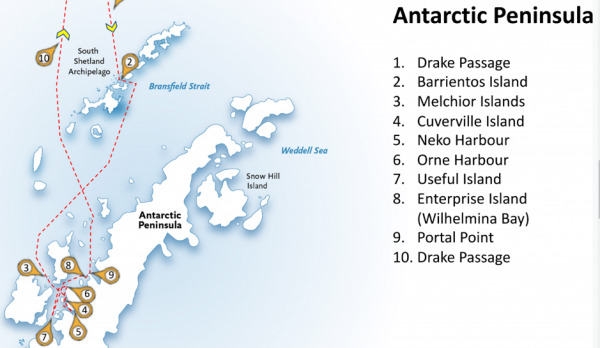 Map of the Antarctic Peninsula

Most cruises offer extra activities besides the zodiac rides and hikes. During my cruise kayaking, paddling (a one-off kayaking experience), stand up paddle boarding, skiing and mountaineering were offered at an extra cost and had to be booked in advance due to limited spaces. However, on the first day you get to put your name on an activity list and go into the lucky draw. The expedition team is trying to give more people the opportunity to participate, so they don’t miss out. But it all depends on the weather. I put my name down for paddling, but unfortunately, I was in the last group and with too much ice on quite a few days there was not enough time.

I did participate in the daily morning Yoga classes. I thoroughly enjoyed each session, even though I had only done Yoga a couple of times beforehand. Some days it was a bit of a balancing act, but we just adjusted our poses. I felt they helped me cope better with the motion sickness. To participate, you just put your name on the list each day – limited spaces!
The other activity I did was the polar plunge! The jump into the 1°C cold water was a one off! .. and it was freezing! I wasn’t the only one, 88 travellers took the plunge and the atmosphere was great. The dip in the hot pool afterwards felt wonderful and so did the whiskey! 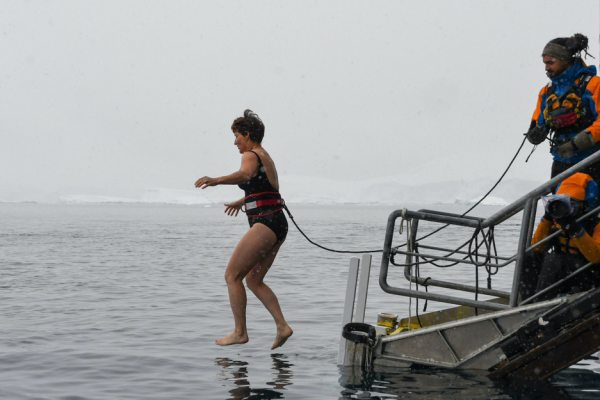 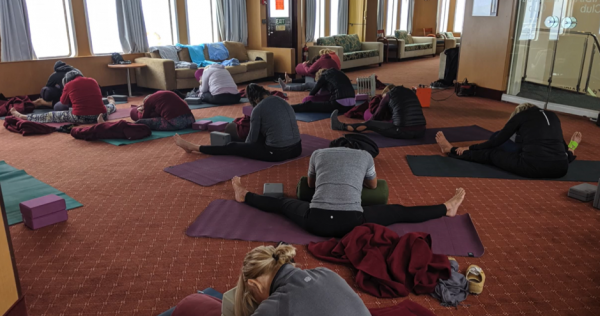 Yoga Class on the Vessel

10) Highlights of my trip

As you can imagine there were quite a few. Icebergs are amazing, each so different and fascinating. The penguins, the way they behave reminds me a bit of little people. They are super cute and even though we saw a lot of them, I never got tired of seeing another penguin. Watching hundreds of penguins swim and jump was incredible.

The scenery is just breathtaking. Add to that the stillness or the honking/gawking of the penguins.

Lots of snow and the pristine white views - it felt like being in a place where no-one has been before.
Meeting all these interesting people on the vessel. I had such a fantastic time and kept in touch with a lot of them. During lockdown we did a zoom meeting with people from all over the world. 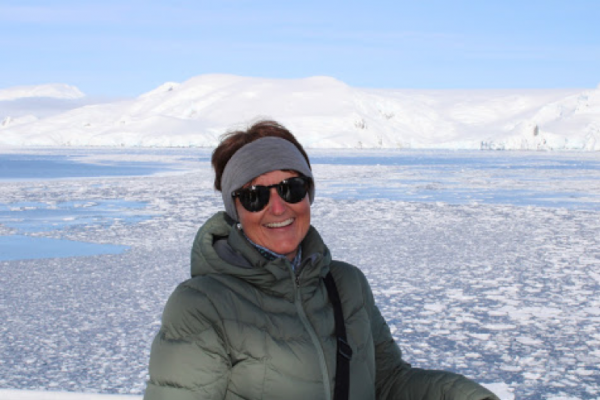 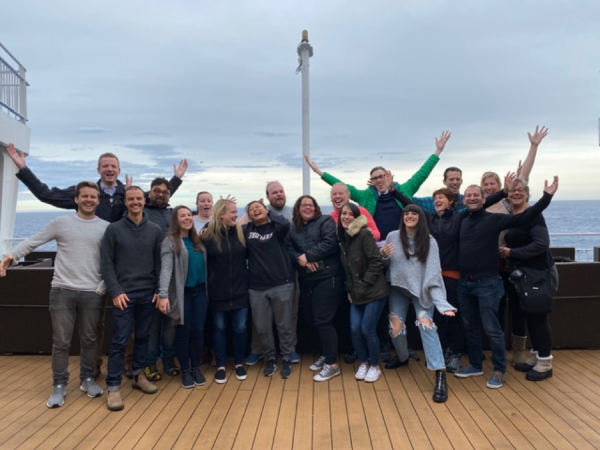 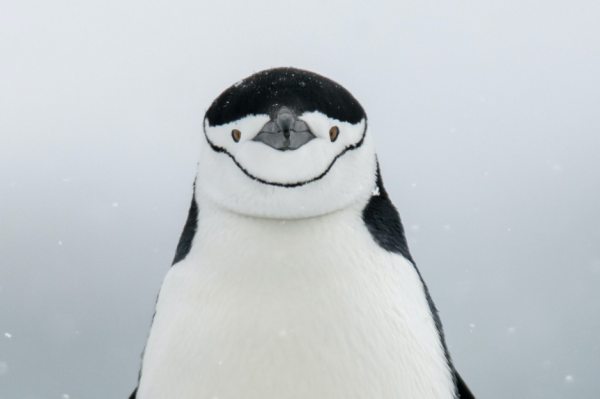