Planning a whirlwind tour of South America’s best trending destination? Our comprehensive Colombia travel guide includes everything you (probably) want to know to help plan your journey, including safety tips, the best time of year to go and the very best highlights of the country you shouldn’t miss. So join us on this virtual journey way off the beaten tourist-path and come discover how sensational your Colombia vacation can be. 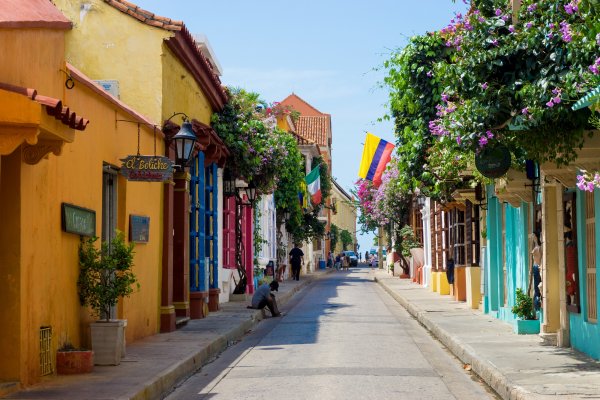 Street scene in the historic old city of Cartagena. Colombia

Is Colombia safe to visit?

Despite the overwhelming news coverage of the 2016 peace deal between the local government and the FARC, we’re still regularly asked if Colombia is a safe place to visit. We’re here to tell you that it is and, more than that, it’s a spectacularly rewarding place to visit, right now! The by-now stabilised peace accord has opened up previously unexplored regions of wilderness yet tourists aren’t the only ones eager to explore Colombia. Developers and prospectors are moving in fast, so come visit now whilst the great majority of the country is unaffected by mass tourism and is still so authentic and pristine.

Over two million foreign tourists visit Colombia every single year and the overwhelming majority never face any safety issues at all. If they do, it’ll usually be related to petty theft. This is still a country that’s struggling to modernise and develop, so some common sense should prevail. Aside from the usual safety precautions you’d normally adopt when visiting a lesser-developed nation, however, there isn’t any cause for alarm here, specifically.

When to go to Colombia?

Being the tropical heaven that it is, Colombia enjoys consistent year-round temps of around 25C at sea level and you can shave about 10 degrees off that when ascending to high altitude. The main yearly climatic change relates to rainfall, which tends to be at its worse in April, June, October and November, whilst rains are still common (but not too bothersome) between July and September. This leaves the period between December and March as the driest and, given it coincides with the international Christmas holiday period, also the most popular and the most expensive for Colombia vacations. There are regional differences, however, given the varied topography of the country. 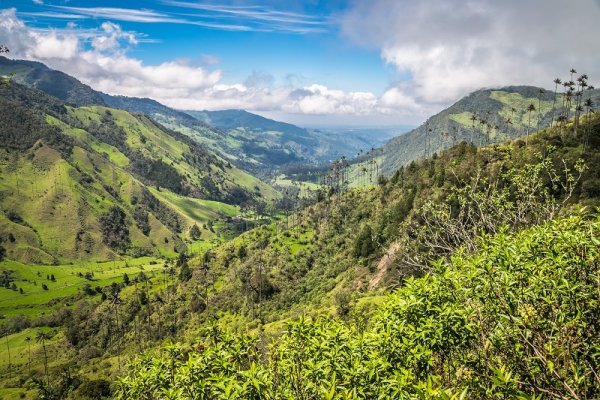 Quite dry all year long with the exception of September and October, the two wettest months of the year on the eastern coast.

The hot and sultry city enjoys average temps ranging between 25 and 30C. January, February and March are the driest months.

A mild climate considering the altitude, Bogota enjoys average temps of around 20C with cooler evenings, all year long. The driest months are January and February.

Mild year-round climate with constant daytime temps of around 27C and nights of a blissful 18C. Medellin is a relatively rainy city, with morning fog an almost year-round occurrence. August is the driest month of the year here.

Best things to do in Colombia

If any country in South America could be said to ‘have it all’ then Colombia is certainly it. Here, you can discover outstanding pre-Colombian ruins, vibrant cities, colourful villages, astonishing Andean Mountains and some of the most sublime beaches in the world, let alone the continent. Locals are super friendly; the climate is idyllic and the whole Colombia travel experience is enchanting and very memorable.

Here are just some of the best highlights you will not want to miss:

The country’s capital is an arty and trendy city infused with magnificent colonial-era architecture and a modern-CBD that you may find difficult to even imagine. From high-end dining and shopping to street parties, street art and world-class museums, Bogota’s the kind of city that’ll kidnap your senses for days on end. This is usually the first city one visits on Colombia tours and it’s a fantastic introduction to the country so purposely plan a few nights here at the very least when you arrive. Bogota is surprisingly beautiful; you’ll kick yourself if you make your visit a fly-by. 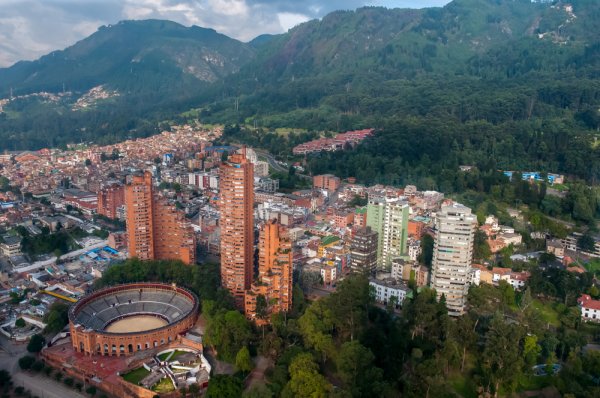 Often dubbed the most pristine colonial treasure in all of Latin America, Cartagena is postcard-pretty in every way. The colourful architecture has earned the city a UNESCO heritage listing, its 500-year-old cobbled core and 13km-long fortified walls giving its European counterparts (like Dubrovnik) a real run for their money. This was once the richest and most prominent city in the New World and although the city (and country) has gone through many trials and tribulations, the glamour and affluence of the past are still very palpable in Cartagena. Being lapped by the turquoise waves of the Caribbean Sea certainly helps set the idyllic scene. 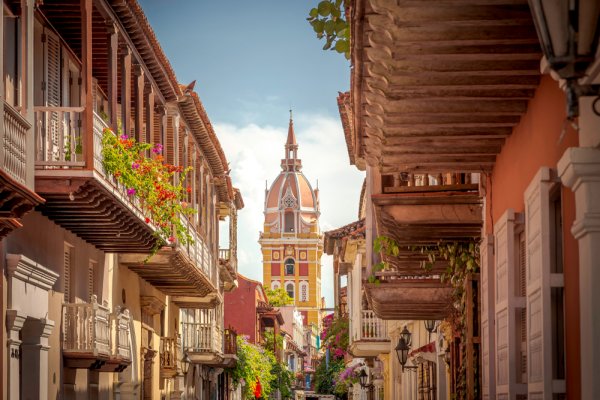 Click HERE to see our tour from Bogota to Cartagena

Travel to any Colombian Island

Being South America’s only country with coastlines on both the Pacific and the Caribbean means Colombia can be an all-encompassing travel destination. Hike the Andes, explore the history and then chill back for a few days on some ridiculously beautiful palm-fringed tropical beach? Yep, you can do it all, right here. Island getaway options abound and include the outer islands of San Andres and Providencia (for true Robinson Crusoe-style Colombian vacations), the eco-tourism Pacific hub of Gorgona (the whole island used to be a prison but is now a national park), the SCUBA-diving mecca that is Isla Fuerte. Head to the Pacific side between June and November for humpback whale sightings and in April, May and June to spot whale sharks. 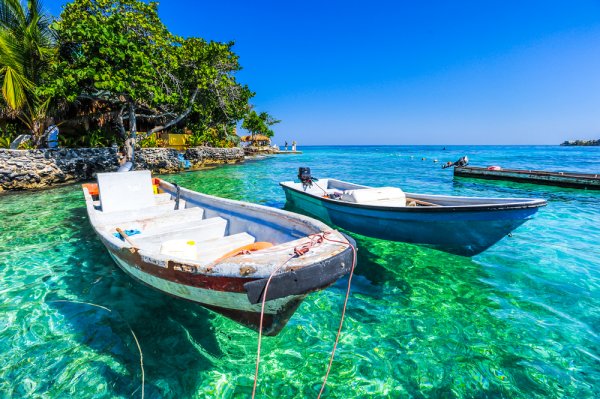 One of Colombia’s most extraordinary historical treasures, Ciudad Perdida is a truly astonishing sight. The heart and soul of the ancient Tayrona culture and a deeply complex town which predates Machu Picchu by more than 600 years, the Lost City of Colombia has only been accessible for the last decade or so. Given the somewhat arduous trek needed to reach it, however, it remains one of the least tackled hiking trails in all of South America. What remains of the surprisingly advanced Tayronas is impressive enough – stone staircases, terraced farms, ceremonial areas and houses strewn over an extensive area that hasn’t even been fully explored – yet the fact that the city is hidden deep in the heart of a jungle in the northwest of the country is what entices discerning explorers most. The hike to the Lost City of Colombia is not for the faint of heart but if you’re looking for an extraordinary Colombia travel experience, we think you just found it. 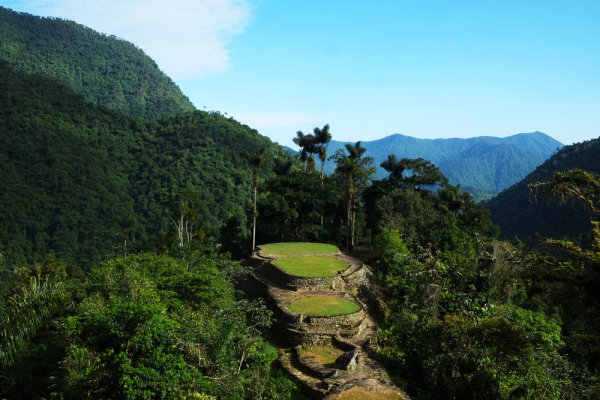 A view of the terraces at the Lost City

Click HERE to find out more about our Lost City Trek

The most idyllic mainland beaches

With over 3000km of coastline, Colombia isn’t exactly short on the ‘jaw-dropping beaches’ so if you don’t have time to head to one of the country’s many paradisaical islands, you’ll still find plenty of drool-worthy gems on the mainland. The Tayrona National Park, just a few hours northeast of Cartagena, would have to boast the most beautiful and easily accessible beaches of all. Considering the park is fervently protected, there’s an abundance of secluded coves and pristine sandy shores, all framed by picturesque mountain peaks that boast hardly any footprints at all.  Further east you’ll find a cluster of out-of-this-world beaches near the town of Palomino, the kind with stunning views, sensational fresh seafood on offer and sweet little beach clubs. You’ll also find resplendent beaches close to the border with Panama, where tiny seaside villages, like jaw-dropping Sapzurro, that can only be reached by boat. 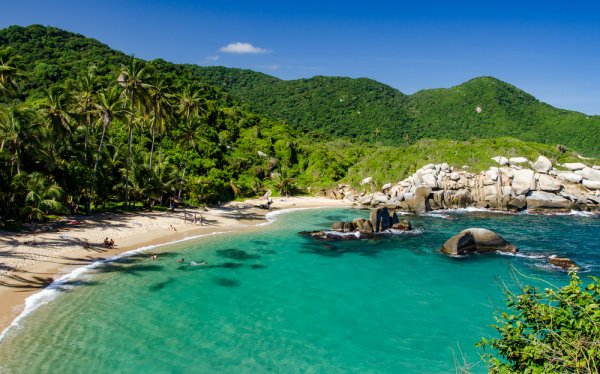 Being the single most bio-diverse nation on earth, per square kilometre, Colombia is a fantastic travel destination for nature lovers. There are over 50 national parks to visit, each one boasting a unique ecosystem and array of creatures. Particularly famous for its mind-boggling array of endemic and migratory birds, Colombia is an ornithologist’s dream playground! The most visited park in the country is Tayrona as it’s easily accessible and boasts both marine and land animals.  The more remote Serrania de la Macarena, home to the spectacular multi-coloured Cano Cristales River, is another bird and animal watcher’s must-visit as is Chingaza National Park (perhaps the country’s #1 birdwatchers choice) which is only a couple of hours from Bogota and boasts one of the few high-altitude plateaus in the entire Andean region. 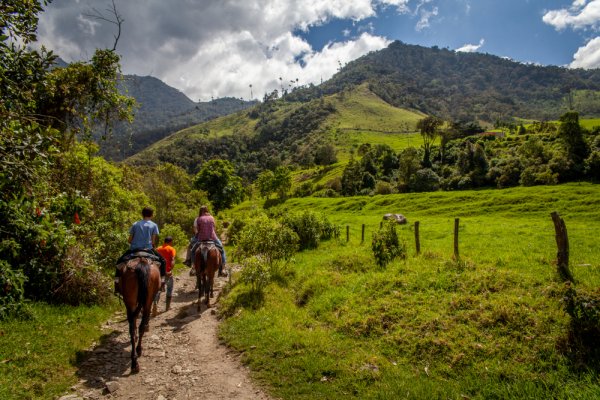 Colombia may still be flying below the tourist radar in South America yet it offers an amazing array of adventures whether you’re into nature, history or exotic culture. The lack of mass tourism is a bonus: the infrastructure is sound enough to make your Colombia tour as comfortable as you’d like yet the feeling of exploring an ‘untapped treasure’ is overwhelming.

Itching to come to discover Colombia with us? Then see our Colombia tour itinerary suggestions and, when you’re ready to go off the tourist trail in South America, just give us a call.