The Southern Lights - A Guide to the Aurora Australis

Many people fly to Norway, Iceland, Canada, or the Arctic Circle in search of the northern lights or aurora borealis, but did you realize that you can see the same phenomena here in New Zealand, and on a scenic charter flight departing from Christchurch, where you can fly above the weather system and view the auroras uninterrupted? Here at Viva Expeditions, we have teamed up with aurora hunter and astrophysicist Dr Ian Griffin to make this possible. 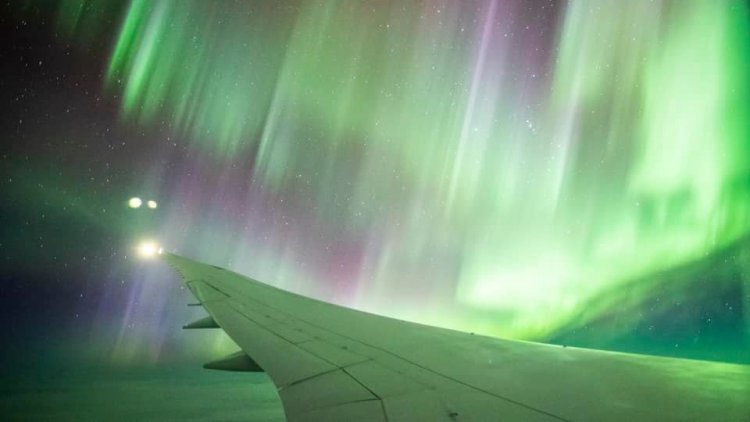 What is the Aurora Australis?

Like its northern sibling, the aurora australis is strongest in an oval centred on the south magnetic pole. However, an aurora begins its journey at the centre of our solar system. The outermost part of the Sun’s atmosphere, drives  solar wind away from the Sun. Some of these particles strike Earth’s magnetic field and follow magnetic field lines down into Earth’s atmosphere at the North and South magnetic poles (also known as the auroral zones).

The magnificent lights of the auroras begin when the particles collide with atoms of our upper atmosphere, a process that results in a glowing field of excited gas. These sheets of lights can take on many beautiful colours, and often persist for hours on end, dancing gracefully in the sky. 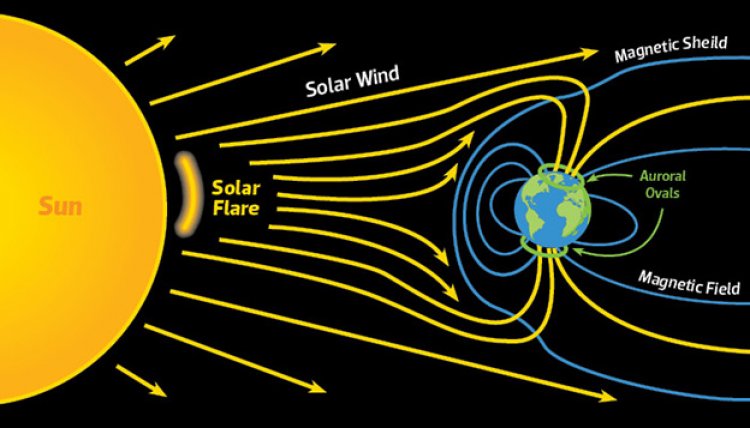 Where and when can you see the Aurora Australis?

Auroras are only visible at night, and usually only appear in lower polar regions. Auroras are visible almost every night near the Arctic and Antarctic Circles, which are about 60 to 70 degrees north and south of the Equator near the Arctic and Antarctic Circles. The type of aurora you may witness will always depend on how active the sun is and every aurora activity is different, but they are always glowing within the auroral zones.

The most active auroras occur when there is an increase in solar wind activity. An increase in activity can lead to auroras being visible at higher latitudes (in the Southern Hemisphere). Although solar weather can change daily, an increase in solar wind activity occurs around the spring and autumn equinoxes. Thanks to a phenomenon called the Russell McPherron effect, auroras are known to be more frequent and brighter than usual in spring and autumn. Close to the equinoxes in March and September, the alignment of the interplanetary magnetic field and Earth’s magnetic field is such that the two opposing fields can cancel each other out. This creates holes in Earth’s magnetosphere through which particles from the solar wind can flow, giving rise to auroras when they interact with the atmosphere.

You can witness the aurora australis from many parts of New Zealand including Stewart Island, Lake Tekapo, Dunedin, The Caitlins and Invercargill if you are lucky!

As mentioned, every aurora is different, therefore some people never get enough of seeing them. It is very important to understand generally what to expect when viewing the aurora australis. An aurora usually builds in strength and becomes brighter as the evening progresses, so what you may be first seeing as a silvery colour or ribbon, can soon develop into a brighter and easier to see arc or even a dancing wave in the sky.

The auroras generally present as a beautifully paced, slow-moving natural phenomenon. The waves will often glide across the sky rather than moving back and forth quickly like they do in some of the time lapse videos you may have seen.

What colour are the aurora?

Simply put, most auroras are green which is caused by ions colliding with oxygen at lower altitudes. That would be the shortest and scientifically correct answer, (there are other colours of the aurora reds, blue and purple which is caused from collisions with nitrogen, but green is the most commonly observed and relevant colour to this question). However, it doesn’t always appear green to our eyes. Sometimes it can be silvery in appearance, or even a strange hue of grey or white, however if you point a camera at it, you will usually see green pop out from the sky.

The Naked Eye vs a Camera 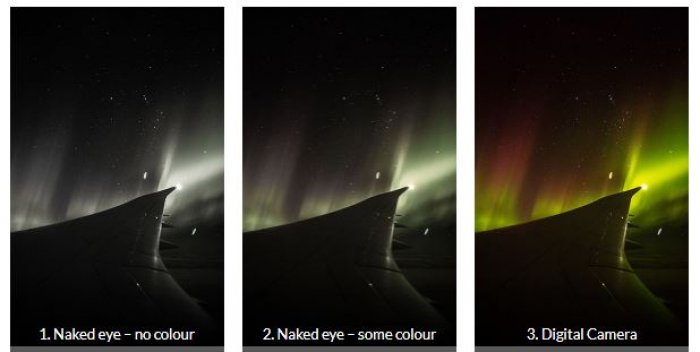 “I’m sure most of us have seen those beautiful colourful aurora images, and some of you may have wondered if the colours in these pictures are in fact real, or are they just the product of overzealous photoshopping. Well, the answer is “yes”, the colours are indeed very real, however it’s important to realise that modern cameras are significantly more sensitive to colour than the human eye. The human perception is therefore always something a little less intense.

To understand how the eye perceives the colour of the aurora, it’s useful to have a basic understanding of the structure and function of the eye. The retina (the layer of cells at the back of the eye that sense and respond to light) contains two type of photo sensor cells, the “Rods” and the “Cones”. Rods are exceptionally sensitive to light, but they are relatively low resolution and only “see” in black and white.

The cones on the other hand can perceive full colour and are highly concentrated in the central retina producing high resolution central colour perception, but they are less sensitive than rods so require a brighter light source to be activated. So dim auroral displays which are only capable of triggering the rods will only be perceived in black and white - the aurora appears as a whitish or grey cloud of constantly changing light. Brighter displays have a greater chance of triggering the cones and resulting in some colour perception. Even still, in all but the very extreme displays, colour will appear muted in comparison to the photos. There is also significant variation between individuals. As we get older, the pupil of the human eye becomes less able to fully dilate in darkness, and a smaller pupil lets in less light. Also, as we age, the lens in the eye can take on a yellow tinge or become slightly opaque, also altering or interfering with colour perception. On the whole, older eyes are less sensitive to light perception in dim conditions. The result is that during the same displays some people will report seeing obvious colour while others will report seeing only grey. Even two people of similar age may report differences in colour perception during the same display.

The single most important thing that you can do to maximised your visual experience of the aurora is to allow your eyes to fully adjust to the darkness. This ensures that the pupils are maximally dilated and that the rods and cones are operating at peak sensitivity. It takes up to 20 minutes for the human eye to fully dark adapt. Even a glimpse of bright light for just a few seconds will set your dark adaptation back several minutes. This is why we completely darken the cabin of the aircraft while in the auroral zone. If you want to take lots of photos, be aware that this will invariably involve frequently looking at a relatively bright LCD view screen, and this will prevent your eyes from fully dark adapting.

In over 20 years of auroral observing, I have concluded that it is not possible to capture the perfect photo and have the perfect visual experience at the same time. I therefore encourage passengers to give some thought about what they want to get out of the experience, and plan accordingly. If you do decide to take photos, it’s essential that you get to know your camera properly (practice using it in the dark before the flight), and if possible, turn off the LCD screen (or at least turn the brightness down to minimum) beforehand. In the end we can’t absolutely guarantee what you will see, but with appropriate understanding and preparation, you can be sure to maximise your viewing pleasure.”

The Southern Lights by Flight with Viva Expeditions

Flying to see the Southern lights on a commercial flight from New Zealand is great because you can fly to the aurora and stay in the aurora as long as possible. These flights are set up to maximise your experience and viewing of the Southern Lights. One of the most unique things about the flight is we are flying above the clouds and the weather, which increase the chances of viewing the aurora for a prolonged period. The plane will literally fly through cross sections of the aurora over the course of the night.

The southern auroral zone has significantly less commercial flight traffic than the northern hemisphere, making it the ideal location to run a dedicated aurora flight. Less air traffic means a greater ability to change flight paths on the night in response to auroral activity and reduce potential light pollution.

Leading the flight is Dr Ian Griffin, an astronomer who has been Director of the Otago Museum since 2013. A self-described aurora fanatic, Ian has led six successful flights into the southern auroral zone. On the two most recent Southern Lights by Flight organised by Viva Expeditions on 20 and 21 March 2021 passengers enjoyed more than five hours of Auroral displays as the aircraft flew thousands of kilometres south of New Zealand.

Learn about our Southern Lights by Flight here. 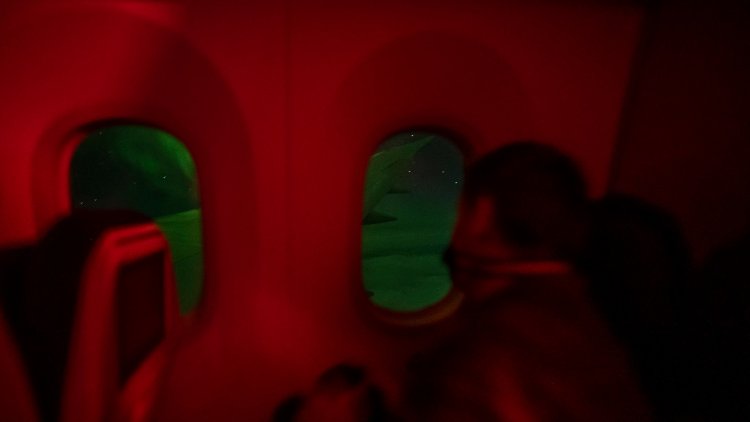 
How to best view auroras in-flight?

We recommend making things as dark as possible, perhaps put a black jumper/hoodie over your head, press your head against the window to view the aurora, relax and wait for your eyes to adjust. The more the adjust, you should see more colour in the aurora. During this time, do not look at the screen on your phone or anything bright, your eyes need to adjust to complete darkness.

Can you recommend the best mode to take photos on a smart phone?

I have a digital camera with a good lens, what settings should I have camera on?

Fantastic, once you book our professional photographers will give you guidance on the best settings. We have photographers that use Canons, Nikon and Sony. Please note all cameras are different so we recommend doing some research online as well.

Get to know your camera

Don’t buy a camera the day before heading out on an aurora trip. You must be familiar with your camera equipment before heading out to capture images of auroras. Regularly taking photos of night time skies is a great way to improve your photography skills and set you up for success. We will be hosting a camera workshop with our professional onboard photographers before the flight takes off however you should still come with some basic knowledge of how to use your camera because every make and model is different and you cannot learn to use a camera in a very short space of time.

Sail the stunning coastline of the Abel Tasman National Park on an exclusive, luxury sailing vessel for you, your family and friends.

The Southern Lights - A Guide to the Aurora Australis

The Best Foods to Try in Latin America