Mexico City, one of the biggest cities on this planet, with over 20 million inhabitants can seem a little overwhelming at first…however it is an amazing city with so much to offer, and should be on any itinerary to Mexico! Viva's suggestion is to plan ahead so you make the best use of your time.

The city is built on an old lake bed, surrounded by mountains and volcanoes. What most people forget is that the city is located approx. 2,200m (over 7200 ft) above sea level, so it is not tropical and can get cool in winter, so don’t forget your sweater for the evenings! There are 2 main seasons; dry season from October to May and rainy from June to September (although this generally just means rain for a few hours in the afternoon). Overall March to May is considered the best time to visit, but anytime is great as the climate is mild!

Mexico City is rich in pre-Hispanic history, and Colonial-era architecture, alongside modern city offerings. It is a fantastic blend of the old and new, and offers some of the best museums, galleries, local cantinas, and restaurants around! So where to start….

Where to eat in Mexico City

How to escape Mexico City

One of my favourite museums in the world and not to be missed! Explore the beautiful art and history of Mexico with spaces dedicated to the first nomadic tribes of Mexico, through to the Olmec, Aztecs, Mayans, and more! Also the home of the stunning “Aztec calendar”.

There are 23 permanent exhibition halls at the museum. On the lower level, visitors can explore displays devoted to archaeology, while displays highlighting the culture of modern indigenous communities in Mexico can be found on the upper level.

The exhibits on the right side of the museum's main hall provide a chronological overview of cultural development in central Mexico. You can get a sense of how different cultures developed over time by moving from right to left, with the culmination being the Mexica (Aztec) exhibit, which features large stone sculptures, the most well-known of which is the Aztec Calendar, also known as the "Sun Stone.

2. Teotihuacan – the pyramids of the sun and moon

Another must-see, the ancient site of Teotihuacan, also known as the City of the Gods. Take your walking shoes and a bottle of water and climb the Sun and Moon pyramids and gaze over this ancient site, wondering what life was like once upon a time in Mexico! Or if you are up for an exciting adventure...why not experience hot air ballooning over the pyramids themselves - well worth the early morning start. Be sure to check out our Signature Mexico tour for details.

By the sixth century, Teotihuacan had grown to a population of 125,000-200,000, making it the first major city in the Americas. The Mexica (also known as the Aztecs) gave the city its current name, Teotihuacan (from the Nahuatl phrase "the place where the gods were created"), centuries after it had been abandoned in the seventh century. Although the Aztecs gave their structures meaningful names, they never encountered this civilisation. Because so little is known about the people who constructed Teotihuacan, most of what is known about the site, its art, and Teotihuacan culture come from Aztec writings. Teotihuacan, which was mostly built before 250 C.E., is a testament to its people's ambition, as it was the first American city built on a grid plan. 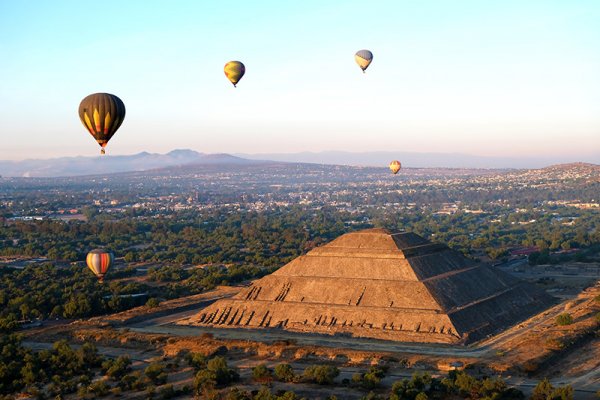 Explore one Mexico City's traditional neighbourhoods, and enjoy strolling through the streets and markets (Make sure you head into the traditional food market and try some amazing tostadas and smoothies!). During the week it is nice to enjoy daily life and a quieter atmosphere, but also fun in the weekends when it is bustling. This is a popular places for locals to come and enjoy too.
Coyoacán,  translates as "Land of the Coyotes")is a rich with colonial architecture, typical houses from their era, quaint parks and cafes. Famous artists and writers like Trotsky and Frida Kahlo found solace and creativity here, among the colourful buildings and cobblestone streets. Take your time just to wander, explore and be inspired.

The birthplace and childhood home of the famous Mexican artist Frida Kahlo is now preserved as the Frida Kahlo Museum (Museo Frida Kahlo), also known as "the Blue House" (La Casa Azul) due to the museum's strikingly blue facade. An intriguing collection of personal objects, furnishings, sketches, and paintings can be found inside the house, providing insight into her fascinating life. This place is super popular these days, so try to go off-peak or pre-book a tour! 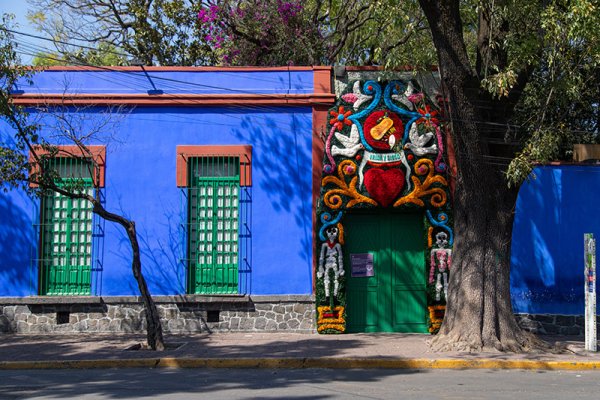 The Palacio de Bellas Artes (or Palace of Fine Arts) is a piece of art in itself! Formerly known as the Communications and Public Works Palace, this museum can be found in the middle of Mexico City's historic district and is widely regarded as one of the finest examples of Mexican architecture from the early 20th century. Located in the Central Historic area it is famous for exhibiting the art of the famous muralists Diego Rivera, José Clemente Orozco, David Alfaro Siqueiros, and Rufino Tamayo. The Palace is also a great venue for concerts and other events to check out what is on for your travel dates. 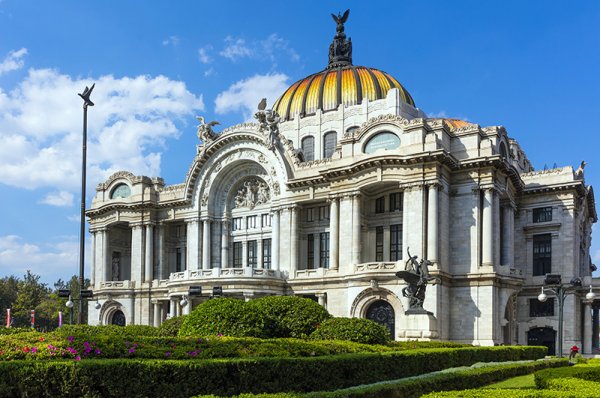 The Mexican presidency and the Federal Treasury both have their headquarters in the Palacio Nacional (National Palace), which serves as the seat of the federal branch of government in Mexico. The Biblioteca Miguel Lerdo de Tejada, one of the country's most prestigious libraries, is located there as well and features beautiful murals on its walls. However, one of the main reasons people go to the Palacio Nacional is to marvel at the various works of art by Diego Rivera, arguably the most well-known artist to come out of Mexico.

From Aztec times to the present, the Zócalo in Mexico City has been and still is a thriving public square where people and visitors alike congregate. The Plaza de la Constitución is located in the heart of Mexico City's colonial past. Folk dancers, artists peddling their products, street food sellers, and more fill the streets here.

The best place to learn about the city's colonial past is in the San Angel area. The public plazas and gardens, as well as the stately palaces that line them, attest to this. It's an absolute pleasure to go for a stroll around here. The winding, tree-lined streets are peaceful and suggestive of a rural area rather than a city suburb during most of the day. In truth, San Angel was originally a rural hamlet centered on a cathedral, where many members of the upper class made their houses. There are a lot of amazing places to see in the neighbourhood, and it is a great palace to purchase a high end souvenir or piece of art from one of the many galleries.

Learn about the fascinating  history of Mexico City, built on the remains of an Aztec city, when you explore  Xochimilco’s canals and artificial islands. They are one of the few remaining glimpses of pre-colonial life in Mexico City, and are part of a UNESCO World Heritage site. Take a bright barge and be rowed around these ancient waterways, no doubt there will be some mariachi around to serenade you! Yes, it can be tacky, but go with a fun Mexican spirit and have a good laugh! 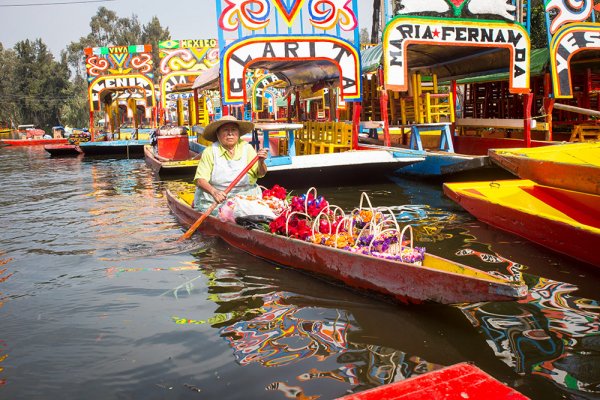 9. Templo Major or the Museum of Popular Arts

Even if you "don't like museums", they are worth a look in Mexico City - there are so many cool and beautiful things to see. The Templo Mayor, right in the heart of Mexico City, was the main temple of the Mexica people in their capital city of Tenochtitlan, which is now Mexico City. Not much remains, as the Spanish invaders demolished the temple, but it is interesting to see remnants and imagine what it was like, before heading indoors, where you will find stunning craved stones in the shape of jaguars,, the rain god, masks of jade, words really cannot describe the beauty of these early works of art. If you are after some fun, check out the Musuem of Popular Arts, to find quirky folk art from skeletons from the Day of the Dead, to a VW Beetle completely covered in beads!

If Mexican wrestling is your thing, then Mexico City is the home to Lucha Libre, check out an event!
Although soccer remains the most popular spectator sport in Mexico, the country's version of professional wrestling (freestyle wrestling) is quickly gaining popularity. Since the late 1950s, Lucha Libre has been an integral part of Mexican popular culture. You won't want to miss this unforgettable show, which features brightly coloured masks, flamboyant characters, and a lot of Spandex. 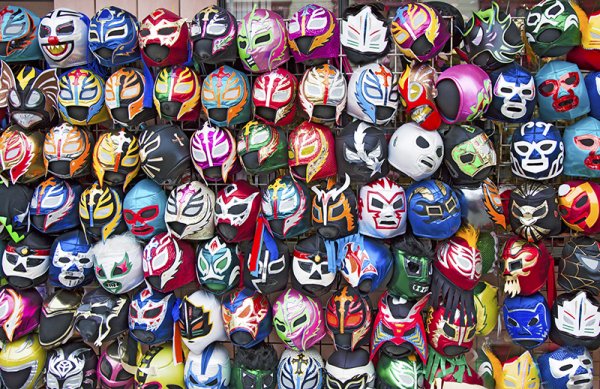 Where to eat in Mexico City?

With 1000s of great hole-in-the-wall food stalls and restaurants, you are spoiled for choice in Mexico City. For a treat try: 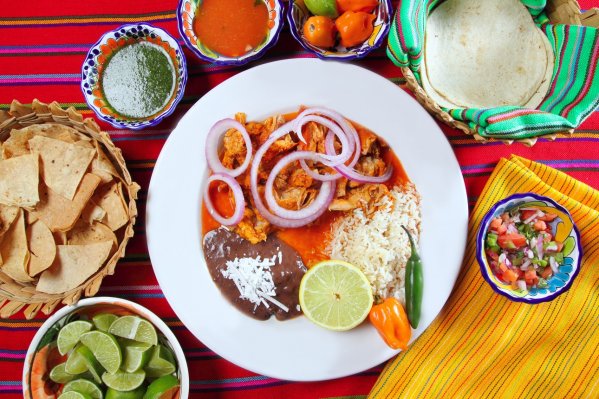 How to escape Mexico City?

Ready to head out of the city; take a day trip to the silver mining town of Taxco, and explore the steep and narrow of this charming small colonial city, or head to Cholula, a pre-Columbian archaeological site and one of the oldest cities in the Americas!

For more info on our Mexico Tours and help in choosing where to go, when to go, and what to see and do…contact us today.