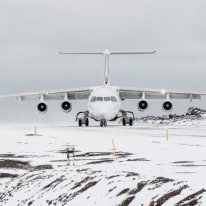 We use three similar aircraft for fly cruise operations: the BAE 146-200, the AVRO RJ 85, and the AVRO RJ 100. These aircraft were manufactured in the United Kingdom by British Aerospace (which later became part of BAE Systems). They are high-wing aircraft with short runway requirements, which means they are particularly suited for this kind of destination. They are operated by Aerovías DAP, which have more than 25 years of experience flying in Patagonia and Antarctica.